NOTE: When I first did this series of posts, I had several more songs embedded than I now have. It would seem that Beatles management has gone around asking people to delete the songs. So I only have what’s remaining up there. If the series flows choppily, that’s likely why. I haven’t had a chance to revisit all the text, just making sure I didn’t keep getting the dread “video not found.”

Well, she was just 17
You know what I mean
And the way she looked was way beyond compare
So how could I dance with another (Ooh)
When I saw her standing there

I had originally wanted to use a picture of the Beatles at the Cavern with Pete Best on drums. Then this photo cropped up somewhere and I dug it. Bear in mind that this is 1957 and Ringo Starr was not to join them for a full five years. Drummers sort of came and went in those days. (Best, of course, was the drummer they somewhat unceremoniously kicked out – or had Brian Epstein kick out – just prior to international superstardom.)

I heard Pete speak last year at one of those conventions that’s a smorgasbord of loosely related vendors and exhibits. Of course he has regrets but he seems to have finally made his peace with the whole thing.

While John was already kicking around with the Quarrymen, the band that eventually became the Beatles really only came into being when John Lennon met Paul McCartney on July 6, 1957. (The band went through a variety of names including the Silver Beatles, Johnny and the Moondogs, etc. They eventually settled on Beatles which was an homage to Buddy Holly’s group, the Crickets.)

If you’re curious, there is a very poor audio recording of Lennon’s band, the Quarrymen playing on that day which you can listen to here. McCartney was listening too as he was not yet a member of the band. (Lennon’s in the picture sitting down, third from right.. And yes they actually played from a flatbed truck).

Believe it or not, there is actually a book called “The Day John Met Paul: An Hour-By-Hour Account of How the Beatles Began” which you can find on Amazon. For true fanatics only which means I am destined to eventually read it.

But as to what they actually played at the Cavern and what it must have sounded like to be there, well again, believe it or not, there actually is actually a video from 1962. This is a song called “Some Other Guy” by songwriters Lieber and Stoller. The quality is not great but what the hell, it’s historic. It’s actually the first known video with Ringo, Pete Best having been fired by the band just recently. (Supposedly someone yells “We want Pete” but I can’t hear it.)

The Cavern Club was, of course, where Brian Epstein first discovered the band falling for their “music, their beat, and their sense of humor on stage—and, even afterwards, when I met them, I was struck again by their personal charm.” And by some accounts, he was instantly smitten with John Lennon.

Over the course of a two-and-a-half-year period the Beatles made anywhere between 275 and 292 appearances at the club. Their final performance was on August 3 1963. The Cavern was demolished in the ’70’s but has since been rebuilt. And on Matthew Street – the site of the original club – there’s a weirdly religious-looking plaque that reads, “Four Lads Who Shook The World” which you can see at the bottom of my previous post.

One of my very favorite Beatles songs is “Please Please Me” from their first album. It was a number that John and Paul had worked on and originally envisioned as a slower, bluesier number more in the vein of Roy Orbison. But producer George Martin convinced them to speed it up, eventually rendering the version we know today.

I seem to remember reading somewhere that he then said, “Congratulations boys, you have your first big hit.” Which they did as it reached number one on the British New Musical Express and Melody Maker charts. They didn’t really have an impact on the American charts till early ’64 with “I Want to Hold Your Hand.”

Please Please Me on Spotify

During this time, the Beatles were traveling back and forth to Hamburg, Germany on a more or less regular basis to play in clubs there. (This is where they met Astrid Kirchherr and Klaus Voorman who would be important to their story. Astrid first styled their “Beatle haircut” and fell in love with bass player Stu Sutcliffe. Voorman later designed the cover of their album, “Revolver” and played bass in the Plastic Ono Band.)

The Fab Four further refined their shows in Germany when they had to play multiple sets per night to drunken German fans. (They played on a street called the Reeperbahn whose description today doesn’t apparently vary much from its description in 1961: “The street is lined with restaurants, night clubs, discotheques and bars. There are also strip clubs, sex shops, brothels, a sex museum (!) and similar businesses.”) This area was, to say the least, somewhat of an education for the lads (George, the youngest, was all of 17).

“Mak show, Beatles! Mak show!” their fans would shout. And the Beatles not only played relentlessly but also stomped around the stage, ate food, smoked cigarettes, gave the Nazi salute – whatever it took. (Hamburg is also where they met Ringo Starr).

“I Saw Her Standing There” kicks off their first album and is to this day an exciting, fun song that McCartney continues to play live. (If you get a chance, one of my favorites on YouTube is of McCartney and Springsteen performing it together. Bruce, consider yourself lucky, man).

I usually do three songs. But this is the Beatles right? And we love them. Plus, we need a George song, don’t we? Yes we bloody well do. The Beatles used to scour Brian Epstein’s music store, looking for good songs to listen to and play. This obscure tune – originally called “Devil In His Heart” – was some minor non-hit ‘B’ side of a record. But of course the Beatles knew how to hear a good song and make the best of it.

Sources: Wikipedia and The Beatles Bible. 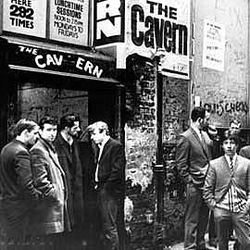