I recently wrote a post wherein I listed my top ten live concerts of all time. That list, as it turns out, was premature and – knowing I was going to see The Who – don’t exactly know what I was thinking. Because quite simply,this was one of the best shows I have ever seen in my life.

So I had to go back and revise that list and sadly, Jeff Back/Stevie Ray Vaughn have become an honorary mention and this show is now in the Top Ten, more likely in the Top Five. It was just an awesome, mind-blowing show.

In what I can only deem the world’s greatest oversight on my part, despite The Who touring the States some twenty times, I had never seen them. This current tour is called The Who Hits 50! and I tell you what, it sure didn’t seem like it.

Anybody I’ve told about it says, basically A) are they still around? and B) they’re old so they must suck. Well, they’re very much around and they sound fantastic. I think the main word I’d associate with them is POWERFUL. Keith Moon was always a propulsive drummer. And for quite a number of years now, Ringo’s son (and Keith’s godson) Zak has been their drummer and he is a worthy inheritor of the crown.

The show was just big. And exciting.  And fun. We were about twenty rows back and they had a big crystal-clear central screen with two side screens. The sound was pristine, loud but not deafeningly so. First song? “Who Are You.” They started there? Hell, isn’t that supposed to be an encore or something?

I had read prior to the show that Townshend really doesn’t like touring or, for that matter, even playing live. Well, that’s bullshit. He was having a great time, talking a lot between songs, bantering with Daltrey. He kept teasing the crowd saying that every time he said “Boston” we’d cheer so he said it about 15 times and we cheered every time like the mindless louts we were.

Roger was in fantastic voice hitting all the high notes, the “Won’t Get Fooled Again,” scream, the whole works. Townshend’s voice sounded good but he struggled a little bit with the high notes. His guitar playing was solid as always but he didn’t really go outside the box playing-wise. (No equipment got smashed. It’s ironic that they used to smash equipment when they couldn’t afford it, now they can and they don’t).

My son Nick, a millennial, was pretty excited to go to the show with me. He’s not heavily into classic rock but he knows and likes a handful (Beatles, Hendrix, etc.) So this was a big, big deal for him. He couldn’t believe he was in the room with two guys who were playing to a couple hundred people in a small club in Shepherd’s Bush, London in 1964. Neither could I.

He asked me if there were any songs I didn’t hear that I would like to have. Yes, take out “The Seeker,” and “Join Together,” add in “I Can’t Explain,” “Magic Bus.” and “Substitute.” and voila, perfection. It would be nice too if they did some of the old R&B songs like “Young Man Blues,” and “Fortune Teller,” but you can’t have it all.

Side note: there was an opening act, a female bass player named Tal Wilkenfeld. As soon as she came out, we both recognized her. She played bass for Jeff Beck on a show recorded at Ronnie Scott’s in London. She’s basically a jazzer and has played with everybody. We really enjoyed her band and I think the crowd was appreciative and supportive. Good voice too. I described her music as heavy Lord of the Rings.

If you’re at all a Who fan, do not hesitate to see these guys. I can’t imagine any band playing as well as this or having so many great songs. Expect much microphone-swinging, guitar windmilling and teenage wastelanding.

Click on the bolded links below for a recent taste of them live. (It’s from 2015 but it’s the same tour. We were supposed to have gone to the show several months ago but it was postponed due to Daltrey having gotten sick.)

Who Are You
The Seeker
The Kids Are Alright
I Can See For Miles
My Generation
The Real Me
Pictures of Lily
Behind Blue Eyes
Bargain
Join Together
You Better, You Bet
I’m One
The Rock
Love Reign O’er Me
Eminence Front
Amazing Journey
Sparks
Pinball Wizard
See Me, Feel Me/Listening to You
Baba O’Reily
Won’t Get Fooled Again 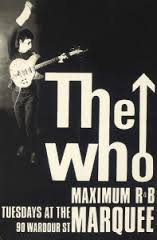 21 thoughts on “Concert Review – The Who at TD Garden, Boston”