In the late 1960’s, some record company marketing genius decided that Boston should have a music “scene” like San Francisco. And so rather than have it grow up organically they tried to invent it (“The Bosstown Sound!”) citing bands such as The Ultimate Spinach and Orpheus.

For a variety of reasons, including being completely trashed by the local rock press, this brainfart idea failed miserably. And so, despite the fact that bands such as Fleetwood Mac and Led Zeppelin played the Boston Tea Party routinely, the buzz was that a band could not break out of Boston.

But eventually a scene – if not a consistent sound – did emerge and spawn these acts: Pixies, ‘Til Tuesday, Mission of Burma, Mighty Mighty Bosstones, Lemonheads, Letters to Cleo, The Cars, Blake Babies, Dresden Dolls, Boston, Guster, Godsmack, Buffalo Tom, Belly, Morphine, Dropkick Murphys, The Breeders, Susan Tedeschi, Extreme, They Might Be Giants.

And two bands that were very blues-based: J. Geils Blues Band – who laid it down more traditionally – and a band that cranked it out more heavily like the Yardbirds or Zeppelin. That band was Aerosmith.

“The Bad Boys from Boston” are actually originally from Yonkers and the Bronx and – most significantly – Lake Sunapee, New Hampshire. Sunapee is a resort town about 100 miles NW of Boston. Steven Tallarico (later Tyler) used to vacation there and that’s where he met guitarist Joe Perry and bass player Tom Hamilton.

Tyler had been playing drums and singing in clubs for several years. But it was clear that his outsized, extroverted personality could not be contained behind a drum kit. Tyler was at that time with a band called Chain Reaction. If you’re curious, check out how they sounded on this pop-sounding track called “Ever Lovin’ Man.” (1966).

One night, Tyler went to see Hamilton and Perry in a band in Sunapee and basically, saw his destiny. He wanted badly to make it in rock and roll and needed guys who hammered like these two to power his vision. (If you read about these guys, there are no more determined people to succeed than Tyler and maybe even to a greater extent, Perry.)

Eventually, they hooked up with drummer Joey Kramer (who knew Tyler from New York) and guitarist Ray Tabano. (Tabano was a tough-guy friend of Tyler’s from New York. Musically, he couldn’t cut it and was eventually replaced by Brad Whitford.) They all moved down to Boston and lived at 1325 Commonwealth Avenue. 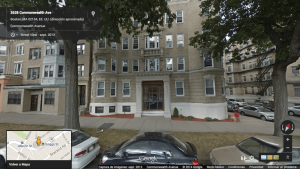 Comm. Ave is a broad boulevard that runs throughout Boston past Fenway Park, past Boston University, curves around goes (at least) all the way up to Boston College. (Yours truly lived a few blocks away from 1325 a few years after Aerosmith had come and gone. The neighborhood – Allston – is to this day a notorious student cell in a city of 250,000 students.)

The band were to live together at 1325 for two years, getting high, writing songs, planning world conquest, playing live, getting high. And while they were a Boston band in the sense that they lived there and rehearsed at every venue in town (always getting home in time to catch The Three Stooges on TV) they had an aversion to the club scene and played mostly at high schools to teenagers.

Their fear seemed to be that if they played clubs they’d be stuck there forever like a million other bands. Not clear to me how high school auditoriums are better.

Eventually, through touring and especially through a savvy guy who used to own a theater where they rehearsed, they got managed by a colorful Boston Irishman named Frank Connelly. They went to New York and auditioned for both Columbia and Atlantic Records.

They really wanted to be on Atlantic because that’s where bands like  Zeppelin, Cream and Ray Charles were. Columbia had Simon and Garfunkel and had just signed Bruce Springsteen, who was to be the labels’ darling.

Atlantic didn’t like them so they wound up on Columbia where, in late 1972, they recorded their first album, Aerosmith. Released in January 1973, this album initially sold way below expectations, like 30,000 copies. Over time, the band have tried to distance themselves from it. Not the songs, which they still play, but the performances and production.  (Maybe they shouldn’t have used Adrian Barber to produce it who managed to fuck up the sound of the Allman Brothers‘ first album.)

They felt Aerosmith sounded too much like a band that recorded an album “live” than a band with a produced album. Which for me, is exactly what I liked about it. This was the first Aerosmith album I ever heard and I don’t know, I loved it. I didn’t hear it till a friend turned me on to it, maybe a year after its release. I still think it’s one of the best, rawest things they ever did.

Here’s “One Way Street.”  This is such a great tune. It really swings. (Rhythm and harp coming from The Stones’ “Midnight Rambler” per Tyler.) PLAY IT LOUD!

Tyler had written the song “Dream On,” on piano when he was 16 or 17. Asked what it was about, he said listen to the lyrics. The song was not a hit until it was re-released years later. And as good as it is, (Perry never liked it), it’s so ubiquitous I’ll go with the great “Mama Kin.” (The band had a club called Mama Kin in the ’90’s in Boston for a few years.)

Even though Columbia wanted to toss them off the label, their management convinced them to let the guys record another album. And in the intervening year, the band kept touring, playing not only the New England ara but expanding to tough-as-nails places like Detroit. Detroit was (and is) famous for its fans going apeshit over rock and roll and they started to love Aerosmith. (There’s a live Stones bootleg out there from a Sixties tour called, We Never Really Got it on Till Detroit.)

There’s several songs I could play from that second album (Get Your Wings), but to demonstrate that Aerosmith were more into Yardbirds than Stones (with whom they were constantly compared), here’s “Train Kept A-Rollin'” (a song that Tyler, Hamilton and Perry were playing in their respective bands before they joined forces):

Get Your Wings marks the beginning of the band’s association with Jack Douglas who produced their most iconic albums. Douglas also later famously produced John Lennon’s final album, Double Fantasy.

Next: Musically the band soars. But they become the walking definition of rock and roll excess.

Sources: Walk This Way, The Autobiography of Aerosmith. Harper Collins. Rocks: My Life In and Out of Aerosmith, Joe Perry. Simon & Schuster.