This documentary (directed by Colin Hanks) starts out by advising that in 1999, Tower Records had sales of over one billion dollars. Five years later they filed for bankruptcy. All Things Must Pass (not to be confused with the George Harrison album) is the All-American story of capitalism. Of succeeding beyond one’s dreams. Then overreaching. Then failing to change.

Like, I suppose, a lot of you, I used to love to go to record stores. It was fun just to go in, hang out for a while, browse around and check out the new stuff. (And some of the older stuff too.) Tower used to have a terrific free music magazine called Pulse that I loved to read.

I never really asked the clerks for advice. I confess I was never much interested in their opinion. I trusted my friends, Rolling Stone, what I heard on the radio, etc. But then they all (Tower, local shops, HMV) went away. (In New England, we still have a chain called Newbury Comics. Aimee Mann worked in the Boston store before she hit it big. And Barnes and Noble sells albums, both CD and vinyl.)

So what happened? I won’t attempt to relate the entire story as this is meant to be a review, not a history per se. But a quick summary is in order:

In 1960, Tower Records, with its Shell Oil-derived color scheme, opened in Sacramento, California under the leadership of a colorful character named Russ Solomon. This store was an outgrowth of Tower Drugs where they had more or less stumbled on a profitable venture. Essentially they were buying used records for 3 cents, selling them for 10 cents.

Solomon’s father had been running the drugstore and did not want to go deeply into the record business nor did he want to finance it. And so Russ, seeing opportunity, took it over. The movie details how there were no real record stores in Sacramento at the time, certainly not ones that catered to teenage tastes. There were certainly albums back in 1960, but the explosion of kids buying albums really started with bands like the Beach Boys and the so-called British Invasion.

The store (motto: No Music No Life) later expanded to San Francisco and then Los Angeles, both locations immediately taking off. LA especially had rock stars hanging out there and buying records. Elton John in particular was an avid visitor. “I spent more money in Tower Records than any other human being,” he advises. There’s old film of him shopping along with interviews with rockers like Bruce Springsteen and overgrown kid Dave Grohl. John Lennon even did a commercial for Tower.

Springsteen couldn’t believe the depth of inventory and it’s interesting to hear him talk about how they featured his albums. “It’s that place where your dreams meet the listener. That audience you dreamt of is walking through the door.”

Russ hired a lot of clerks who became those snobby yet knowledgeable people who seem to always work in these stores. (See movie: High Fidelity). The film details how all of these people worked their way up, often drinking and getting high in the back.

Russ, being somewhat of a free spirit, didn’t seem to mind as long as the job got done. (Well, he frowned on them getting high on company time. But, come on. It’s pretty clear from the employee interviews that something was going on in the back.)

Eventually a couple of guys from Japan got them to expand there. They went to Shibuya which had, and I guess has, a younger, hipper population. Japanese fans loved American rock and roll and liked the idea of it being an American store. And eventually Tower expanded to New York, opening a flagship store there. (Is it just me that finds it odd that they expanded overseas before going national in the US?)

And for close to 40 years, Tower Records had a pretty good run, successively riding the waves of albums then MTV, then CD’s. Even a single blockbuster album like Thriller could bring in a lot of follow-on business.

And then several things happened. For one, they stopped doing their due diligence and expanded into places like Latin America without really understanding the market. Tower went heavily into debt to finance this expansion but were not necessarily making enough money in sales in those areas. And then, in 1999….

Napster. And all of a sudden, people were downloading music for free. As one exec said, “If you have Coca-Cola coming from the faucet for free, why pay for it?” And then when legal methods of streaming music came in, instead of capitalizing on it, Tower stopped selling CD singles. To force people to buy albums.

They wanted to maximize their income whereas this new generation wanted to buy one song at a time. (The movie somehow neglects to mention the fact that Tower was convicted of price-fixing. According to Wikipedia, it is estimated that between 1995 and 2000 customers were overcharged by nearly $500 million and up to $5 per album.)

So this classic combination of expanding too fast, greed, competition (Best Buy!) and not adapting to the marketplace caused Tower to start losing money. (They actually had a web site but the idea of selling streaming music or singles apparently never occurred to anybody.) One of the executives admits they realized too late that in his generation, a record collection was just that – a collection of records. Today your “record collection” is carried with you wherever you go on your iPod.

And when sales dropped precipitously, the banks came in, refused to loan them money and put their own people in place. This was the beginning of the end. (In the movie, Solomon and his staff are bitter about this. But hey guys, the bank didn’t fuck things up, you did. Don’t expect them to throw good money after bad.)

So this movie works on at least two levels – one is as a “whither the record store industry” and the other, the classic “entrepreneur who has great vision, not-so-great-money-sense” story. Definitely worth a view. (I saw it on Showtime and I believe it’s on YouTube.)

The person who told me about this movie advised me there was a twist. So if you want to watch the movie first, stop reading and ignore any comments. And the twist is that…

Tower lives! There are still a few remaining international stores, the preponderance of which (85) are in Japan. Against all odds, the Japanese have managed to maintain all their stores. (Tower was actually forced to sell them off long ago.) The movie does not go into why these stores still exist and why so many in Japan. Is it their culture? Do they sell CD singles? Does the desire to be in a social environment outweigh paying more for records? Don’t know.

Tower Records limped along for a while then was liquidated in 2006. Russ Solomon, raconteur and “ladies man,” is still with us at 90. He’s interviewed in the film and is well worth listening to.

On hearing that the stores were closing and asked by the media for a quote, one of the managers put up a sign at one of the Sacramento stores saying, succinctly:

All Things Must Pass. 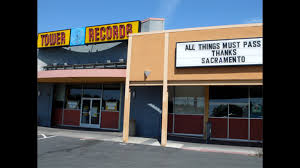