To give you some idea of what type of music skiffle was, here is a list of typical instrumentation:

That’s right. Get a bunch of junk from mom’s pantry and dad’s garage, grab grandpa’s dusty beat-up old guitar in the attic and let ‘er rip. And even though it was popular in England, skiffle had its roots in the American South of the 1920’s.

I wouldn’t say it became popular in any great fashion at that time (or really, ever in the US) and my best guess is that the largely African-American guys who were playing it really did pick up anything that was handy.

Wikipedia: Skiffle in Britain emerged out of the developing post-war British jazz scene, which saw a move away from swing music and towards authentic trad jazz. Among these bands were Ken Colyer’s Jazzmen (including influential trombonist Chris Barber), whose banjo player Lonnie Donegan also performed skiffle music during intervals.

In fact, it was the 24-year old Scotsman Donegan who can claim to be the guy who greatly popularized skiffle in the UK. In 1956, he released a version of the traditional folk song “Rock Island Line.” This song, along with “Heartbreak Hotel” and “Rock Around the Clock,” (all released in the UK in 1956), can lay claim to being responsible for inspiring an entire generation of British rockers:

“Rock Island” was the first gold-certified record in the UK and reached the Top Ten in the US as well. But I would say that with the exception of a little ditty called, “Does Your Chewing Gum Lose Its Flavor on the Bedpost Overnight” – also by Donegan – skiffle was little more than a novelty item in the US.

What was inspirational about this form of music to British teens was that in fact apparently anyone could play it. “In Britain,” Donegan said in an interview, “we were separated from our folk music tradition centuries ago and were imbued with the idea that music was for the upper classes. You had to be very clever to play music. When I came along with the old three chords, people began to think that if I could do it, so could they. It was the reintroduction of the folk music bridge which did that.”

It occurred to me how this music was in that sense very much analogous to the punk uprising in England twenty years later. Andy Partridge of XTC said that skiffle was “acoustic punk basically. … and that was a reaction to the fact that we couldn’t do electric rock n’ roll and young kids couldn’t do classical music … and so it was a homegrown, idiot burst of energy, to sweep away the stuff that we couldn’t do with stuff that didn’t belong to them.”

And so, pretty much out of nowhere, skiffle groups sprung up all over England, seemingly overnight. In fact the Quarrymen, John Lennon’s first band, was pretty much a skiffle group. (The guy to Lennon’s left with his arm extended is holding the top of a tea chest bass.) 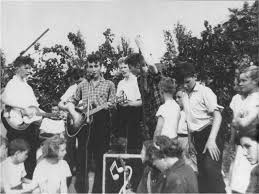 Skiffle, per Bob Spitz’ book The Beatles, was a compromise and one that was acceptable to post-war English parents. Not as wild as rock n’ roll and familiar enough to stay within the boundaries of decent society, they could live with its rocked-up sound. “And,” says Spitz, “Donegan was its perfect spokesman.”

Not in any way, shape or form threatening, this upbeat, catchy pop music was palatable to Mom and Dad’s ears. After all, what harm could it do? No way would this music inspire a bunch of teenagers who would then turn to blues, become wildly successful and embody sex, drugs and rock and roll worldwide throughout the Sixties.

If you think that skiffle was unimportant or easily dismissed, think again. It has been estimated that in the late 1950s, there were 30,000–50,000 skiffle groups in Britain. From my own personal reading, I can tell you that it had an impact on not only The Beatles but also Eric Clapton, Jimmy Page, Jeff Beck, Keith Richards and Mark Knopfler.

Of this era Richards said, “We were very conscious we were in, like, a totally new era. Rock and roll changed the world. It reshaped the way people think. It was almost like A.D. and B.C and 1956 was Year One.”

While researching this post I discovered that there was actually a 1957 British television music show called The Six-Five Special. It was the first BBC program to feature these new rock n’ roll and skiffle acts. The show’s theme song of the same name was a track by the footnote-to-musical-history Bob Cort Skiffle Group:

Having made its mark, by 1958 skiffle was pretty much spent as a force. But that generation of British rockers, now having a taste of what playing music for the masses was like, had also discovered blues, Chuck Berry, Elvis Presley and Buddy Holly. And they never looked back.

Lonnie Donegan passed away in 2002 before he was to perform at a George Harrison tribute concert with the Rolling Stones. He is gone but by no means forgotten. Not only does “The King of Skiffle’s” name come up in every single British rock book I read, he is still revered by many of that generation.

In 2000, Van Morrison released a live album featuring Donegan and Barber called The Skiffle Sessions – Live in Belfast 1998. In that same year, Donegan was made an MBE (Most Excellent Order of the British Empire.) In 2004, Mark Knopfler released a tribute song to Lonegan called “Donegan’s Gone” and says Lonnie was one of his greatest influences:

8 thoughts on “Skiffle – The Roots of British Rock ‘n Roll”