“Here was a band that was really doing it right, incorporating influences from country music, blues, jazz, and rock, and writing great songs. I couldn’t help but compare them to [Cream], which was stupid and futile, but I was frantically looking for a yardstick, and here it was.”
—-Eric Clapton, on hearing The Band’s debut album

By the time Music from Big Pink (cover painting by Dylan) was released in July 1968, this (mostly) Canadian band had been together in one form or another since the late ’50’s, early ’60’s. (The Band deserves – and will get – their own series later on down that long, lonesome road.) But more to the point, they had been a backing band for Bob Dylan’s tours since 1965, including his notorious 1966 tour of England.

They later joined Dylan in Woodstock for the fabled Basement Tapes, legendary because they were rumored about but nobody –  outside of the musicians – had actually heard them. Rolling Stone, among others, hammered away at the existence of these informal tapes, trying to get them released. That did eventually happen but long after bootlegs had circulated.

Several of the guys in The Band lived in a house in upstate (West Saugerties) New York which they dubbed ‘Big Pink.’ They composed songs there but didn’t actually record them at the house, saving that for studios in LA and New York. 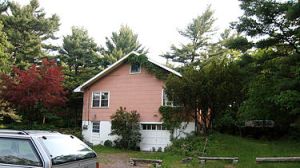 The critical reaction was swift and overwhelmingly positive. (Although that said, it’s pretty clear the Band got a few extra points just because of their association with Dylan.)  One of the most popular songs from the album is “The Weight,” a Robbie Robertson song with American drummer Levon Helm, keyboardist Richard Manuel and bassist Rick Danko on vocals. (One of the great strengths of The Band is the surfeit of great singing voices.)

Although this tune sounds somewhat Biblical, the Nazareth in this song has nothing to do with Jesus and everything to do with the fact that Martin guitars are made in Nazareth, PA. Per Robbie Robertson, the song was partially inspired by the work of Spanish filmmaker Luis Bunuel.

Robertson: “In “The Weight,” someone says, ‘Listen, will you do me this favor? When you get there will you say “hello” to somebody?’ So the guy goes and one thing leads to another and it’s like, ‘holy shit, what has this turned into? I’ve only come to say “hello” and I’ve got myself in this incredible predicament.’ It was very Bunuelish to me at the time.” The characters in the song like Crazy Chester and young Anna Lee are actually friends and acquaintances of the band.

“The Weight” has been recorded by everybody, a notably great funky soulful version done by Aretha Franklin with then-session man Duane Allman on bottleneck:

What people reacted to, I think, in the Band’s music was the return to a rootsy sound, a sense of an Americana. (Why did it take a Canadian band to do this?) One of the surprising adherents to this album was none other than Roger Waters of Pink Floyd. He called it the “second most influential record in the history of rock and roll,” after Sgt. Pepper and said that it “affected Pink Floyd deeply, deeply, deeply.” Boy, I tell you, I can’t hear that at all in their music.

A song I really like from this album is “Chest Fever,” another Robbie Robertson tune, this time with Richard Manuel on vocal. This song is sort of the “anti-Weight” in that they just wanted to lay down a groove without any heavy meaning. (Very Dylan-like, in veering from heavy surrealness to just grooving.)

Crazy organ intro by Garth Hudson, based, so I’m told, on Bach’s Toccata and Fugue in D Minor. I will take their word for it because while I like classical music, I freely admit that my expertise on it is pretty close to zero:

BTW, as to songs being attributed solely to Robertson, this was a huge bone of contention within members of the band. (The only two living members are Robertson and Garth Hudson.) I’ll talk more about it in my eventual Band series. But know that there was much anger at Robertson over this as members believed songwriting was more of a collaborative effort.

Even though they were somewhat trying to escape Dylan’s orbit, there are three songs on this album that are co-written with him. “This Wheel’s on Fire,” has gone on to become somewhat of a standard having been covered by everyone from Elvis Costello to Phil Lesh to the Byrds to the great Dutch band, Golden Earring.

Here’s a nice live (audio only) version from The Last Waltz:

Allmusic: “[This album] came as a surprise. At first blush, the group seemed to affect the sound of a loose jam session, alternating emphasis on different instruments, while the lead and harmony vocals passed back and forth as if the singers were making up their blend on the spot.

In retrospect,  the arrangements seemed far more considered and crafted to support a group of songs that took family, faith, and rural life as their subjects and proceeded to imbue their values with uncertainty. Over time, Music from Big Pink came to be regarded as a watershed work in the history of rock, one that introduced new tones and approaches to the constantly evolving genre.”

12 thoughts on “Featured Album – Music From Big Pink – The Band”