When I found out friend and colleague Harold Waisel was going to a Metallica concert, I said, Hey man, I’m not a big Metallica fan but I like ’em. And that show would make a great guest post for my blog. He agreed and sent me a nice write-up including some great info on supporting bands. I don’t think Harold would be upset with me if I dedicated this post to Chris Cornell. His review is below. Thanks, Harold…

I started getting into Heavy Metal, at least more formally, about nine years ago. I heard “Enter Sandman” on Boston station WBOS of all places, considering it’s more of an alt rock station. They played it many times over the course of a few weeks.  I have no idea why, but I had to find out more about it. That’s when I began listening to Metallica.

My son and I attended Metallica at the TD Garden in January 2009. It was my son’s first concert, and they toured in support of Death Magnetic. We were in the nosebleed section at the Garden. I didn’t know most of the songs.

Fast forward to May 2017, Gillette Stadium in Foxboro on what can only be described as a near perfect summer night in the middle of May in the Boston area. My son and I are there again for Metallica, touring in support of their latest album, Hardwired…to Self Destruct.

We had field seats. When I bought them, I thought they were seats. Nope – they were standing room. We considered rushing the stage at 4:00 PM when the doors opened. Thankfully, we came to our senses.

We got to Patriot Place outside Gillette Stadium around 4:30 PM. From sports bar CBS Scene, we saw that the stadium was pretty much empty for the 6:00 PM show time. (Note – The beer is also half the price of what it costs in the stadium.) Station WZLX was broadcasting from inside the bar so my son and I were briefly on the air with DJ Chuck Nowlin.

At 6:00 PM we decided to enter the stadium. We just kept walking towards the front and ended up about 30-40 feet from the front of the stage, and maybe 25 feet from the extension. If there were 2000 people in the stadium at the time, I’d be surprised.

The opening act, voted upon by fans, was Local H, a duo out of the Chicago area. Yes, a duo, of lead guitarist/vocalist Scott Lucas and drummer Joe Daniels. Kind of like White Stripes in that sense. It would be disingenuous for me to say anything other than I know nothing about them but they had some good songs. In that sense, they were the right opener for Volbeat and Metallica, as Local H played to a very sparse early evening crowd.

Volbeat came on somewhere around 7:00 PM. If you don’t know them, go find them. A very tight, hard rock Danish band whose lead singer, Michael Poulsen, has one of the more distinctive voices in rock today. Former Anthrax member Rob Caggiano provides lead guitar punch. They set up the front extension of the stage like a boxing ring, a nod to the fact Poulsen spars with Danish boxer Mikkel Kessler. Pantera’s Phil Anselmo discusses the rocker he least wants to fight in this interview.

Their set included “The Hangman’s Body Count” and “Lola Montez”, the two songs I’m most familiar with.  Given the tragic suicide of Chris Cornell the day before, they also dedicated “Goodbye Forever” to his memory.

Volbeat ended around 8:00 PM. The stadium finally started to fill, and by the time Ennio Morricone’s “The Ecstasy of Gold” from The Good, The Bad, and The Ugly played on the huge 5-panel video screen at 8: 45 PM, the place was packed.

James Hetfield, Lars Ulrich, Kirk Hammett, and Robert Trujillo arrived on stage and they immediately kicked into the title track from the new album. With the lyrics, “We’re so fucked, shit out of luck, hardwired to self-destruct,” they had everyone’s immediate participation. Depending upon your perspective, fairly timely observation too.

They played (in my opinion) the better songs off the new album, with “Now That We’re Dead” my favorite. They looked as if they like playing this song too:

This is where I’m conflicted. For some reason, they decided to have all four members participate in a group drum solo, with four kettle-like drums. I saw this online last week during their Philadelphia show. To me, it seems to interrupt the flow. I don’t need to see something like this. I wish they used the extra couple of minutes to play “King Nothing.” Anyway, that’s the only nit I have for the entire show.

But the new album is not why most fans attended. Metallica served up some of their best songs. When James Hetfield (“Papa Het” on his vest) yelled “Give me fuel, give me fire, give me that what I desire”, the energy immediately amped up, and I found myself suddenly on the edge of a mosh. A couple of well-placed elbows and all was good:

Following “Fuel,” an acoustic guitar setup signaled the intro to “The Unforgiven.” Another great song, maybe call it a rock ballad. With its chorus, the band fittingly dedicated this to Chris Cornell, as James ended with “We forgive you, Chris”:

What I’ve felt,
What I’ve known
Never shined through in what I’ve shown.
Never free.
Never me.
So I dub thee unforgiven.

“Sad But True” was another highlight. As if their songs aren’t heavy enough, James asked the crowd “Do you want heavy? Metallica gives you heavy.” The tempo was slowed down at the beginning compared to the original, and that seemed to create extra energy in the crowd, besides the fact that it is a great song:

Robert’s bass drives the song throughout. He is easily my favorite bass player since John Entwistle. (Tangent – watch Some Kind of Monster, the Metallica documentary, and go to the parts in the last half hour or so when the band is trying out new bass players.)

Rob kills it. (Tangent 2 – watch the documentary Jaco, which Rob produced. Not only does it shine a light on one of the best bassists and musicians of all-time in Weather Report’s Jaco Pastorius, it shows how Robert Trujillo respects and honors the legacies of bassists before him.)

Throughout the show, the band made good use of the stage, roaming around and switching places while staying extremely engaged with the crowd. They looked they were enjoying themselves and feeding off the crowd.You can tell from the setlist below that after “Halo on Fire,” it was all classics. You can pick your favorites.

You can wish they played more. For me, a middle-aged guy wearing a Metallica t-shirt from 2009 and a New England Patriots hat at Gillette Stadium, I’m happy that I can still stand for 5 hours at a concert and share the experience with my son. Nothing else matters.

Thanks to Jim for allowing me to contribute to his great music blog.  I always learn something about musicians that he covers each week. 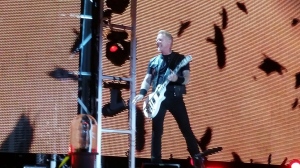 HARDWIRED
ATLAS, RISE!
FOR WHOM THE BELL TOLLS
FUEL
THE UNFORGIVEN
NOW THAT WE’RE DEAD
MOTH INTO FLAME
WHEREVER I MAY ROAM
HALO ON FIRE
MOTORBREATH
SAD BUT TRUE
ONE
MASTER OF PUPPETS
FADE TO BLACK
SEEK AND DESTROY

FIGHT FIRE WITH FIRE
NOTHING ELSE MATTERS
ENTER SANDMAN