The leap from 1970’s Benefit to the following year’s Aqualung is one of the most astonishing progressions in rock history. In the space of one album, Jethro Tull went from relatively unassuming electrified folk-rock to larger-than-life conceptual rock full of sophisticated compositions and complex, intellectual, lyrical constructs. – Allmusic

Hey! And you snatch your rattling last breaths
With deep-sea diver sounds
And the flowers bloom like
Madness in the spring

In 1971, British rock band Jethro Tull released their fourth album, Aqualung. The record was, at the time, taken as an anti-religion concept album but the band has, over the years, strenuously denied this. (Well, at least the concept album part.)

In a Guitar World interview, lead singer/ flutist/majordomo Ian Anderson said, “Aqualung wasn’t a concept album although a lot of people thought so. The idea came about from a photograph my wife at the time took of a tramp in London.

I had feelings of guilt about the homeless, as well as fear and insecurity with people like that who seem a little scary. And I suppose all of that was combined with a slightly romanticized picture of the person who is homeless but yet a free spirit, who either won’t or can’t join in society’s prescribed formats.”

Concept album or no, my chums and I were convinced it spoke to our own nascent soon-to-be-lapsed interest in our Catholic religion. It certainly had a hell of a lot more to say musically and lyric-wise than many of Tull’s peers. And if it doesn’t necessarily hold together as a concept, it sure has a recurring theme as we’ll see in the lyrics.

Jethro Tull (named for an 18th-century agriculturist) had by now been together for four years. They were a growing force in the rock scene and had had some success on the charts. But the song “Aqualung” – with its instantly recognizable opening riff – put them on the map.

The song is co-credited to Anderson and his then-wife, Jennie Franks who wrote much of the first couple verses. It’s kinda hard to tell if she and Anderson are sympathetic or appalled by this guy who “eyes little girls with bad intent.”

It’s almost impossible to feature this album without doing the tune “Cross-Eyed Mary” where our friend Aqualung makes a reappearance. (Hey, guys, maybe this is part of why we thought it was a concept album.) Mary plies her trade in the schoolyard:

I went back and listened to this album prior to writing this post. The first thing that struck me was that it’s just as fine an album (with greatly quotable lyrics) as I remembered. The second was how many acoustic bits it contains in that uniquely British folky way. The third was that yes, it really does have the recurring anti-religion (if not anti-God) theme.

And so, the next song is called “My God.” (In the heyday of albums, bootlegs became a thing. There was a somewhat legendary one called My God. I managed to pick this up after a concert in Central Park. It’s somewhere in that stack of vinyl.)

Ian Anderson, in an interview, said that the album was recorded in the new Island Studios facility which, while state-of-the-art, did not quite give the band the sound they would have liked. Uber-producer Steven Wilson – who has called the album a masterpiece – remastered it in 2011 for a 40th-anniversary edition.

“Hymn 43” continues on that thematic non-concept way. A terrific song and more of Anderson’s musings:

If Jesus saves, well He’d better save Himself
From the gory glory seekers who use His name in death
Oh Jesus save me

Well, I saw Him in the city and on the mountains of the moon
His cross was rather bloody
He could hardly roll His stone
Oh Jesus save me

I dearly wanted to do “Locomotive Breath” here. But you can listen to that on the album. Instead, I’ll end this visit with the song “Wind Up.” Here’s where Anderson really sums up his contempt for, well, not so much religion as much as the British school system:

This album has been widely hailed as perhaps Tull’s finest. (That said, I personally have a great fondness for its follow-up, Thick As a Brick. ) Anderson himself, asked in an interview, said that while yes it’s a good album he doesn’t necessarily believe it’s his Dark Side of the Moon.

He believes his songwriting got much more sophisticated over the years and cites albums such as Crest of a Knave and The Broadsword and the Beast as being just as good if not better.

That may have, as much as anything, been Anderson’s way of saying, Hey, I did a lot of stuff after that. Don’t take that album as my Sgt. Pepper when I equaled or bettered it down the road.

No worries, Ian. As a friend of mine said one time when we saw you long ago and it took you forever to get started –  “Stick the flute in your mouth and play.” 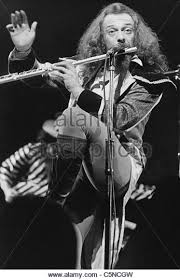 *Fun fact – Led Zep were recording their fourth album, the so-called ZoSo at the same facility in a different studio. (Tull opened for Zeppelin for some dates on their 1969 tour.) According to Barre, Jimmy Page chose that exact moment to show up and wave to him. He had a choice between waving back or getting the solo right. Knowing that if he didn’t nail the solo he could easily be replaced by a flute, he chose not to wave. Good call.