(Pictured above: The Allman Brothers’ final night as a band at the Beacon Theater, Oct. 28, 2014. This show was originally supposed to happen earlier in the year and I had tickets for that final night. But Gregg’s health postponed that from March to October so I instead caught a show a few nights prior to what became the actual last show. That final concert went into the wee hours of the next morning, Oct. 29 which – by design or not – was 43 years to the day since Duane’s death.)

Charleston, SC. Neither of us having ever been there, Lana and I decide to take a walk around the city. My memory is dim but I recall it being a nice, old Southern city with a few unfortunate reminders of the antebellum days. (A slave auction site converted to a marketplace where they sold a sambo doll.)

We talk about the fact that I and some of the other bus guys have been jamming back at the hotel. And then one of us – I think it was Lana – says, “I wonder if we could find a place where you guys could play live.”

Personally, I’m not sure we’re ready for our close-up. But hey, I’m willing to give it a shot if the other guys are. So after checking a few restaurants, we find a place (Lite Bites) that has a back courtyard where bands play. Since it’s early in the week, there’s no band booked so they agree to let us play! (Accounts of how and when we found this place differ but this is my recollection.)

So we go back to the hotel, find Kevin and the other guys and that night, head over to the place. And – play! Yeah, that happened. We just jammed on all the tunes we knew (“Stormy Monday,” “Blue Sky,” “Loan Me a Dime,” “Can’t You See,” “Good Lovin'”) and then when we ran out of tunes, did them again. I was so busy looking at my hands that I didn’t realize we had attracted a crowd. Not just our busmates but some locals as well.

The highlight was “Elizabeth Reed” which we did totally acoustically then flipped our guitars over to drum on the back. I swear I didn’t think I even know the song to play it that well but we got through it. One of the guys had a brainstorm, grabbed the chalkboard out front and wrote down “Tonight – Brothers of The Road.” And so we were. Somehow the waiter got slipped a few tickets to the next night’s ABB show.

Now I don’t remember the exact night when this next thing happened. And since several of us were there and I have their reports, I have a few different perspectives but they all pretty much come out the same way. I know that it was later in the week because I’d gotten a little tired of the backstage scene and went back to the bus to chill out. There were only maybe two or three of us on the bus at the time.

From my diary: “There’s a table in the middle of the front of the bus and that’s where I was sitting. One of my fellow travelers, Bob, was looking for something in his bunk and I was enjoying a cold beverage and listening to the blues.  Next thing I know Paul K. gets on the bus.”

And so does Gregg Allman. I shit you not.

“I’m just sitting there looking at him stupefied. I have by now followed his career for 25 years and there he is, long blonde hair flowing like the gypsy he is. So I call out to Bob in the back and I say, ‘Bob, I think you outta come up here.’ Meanwhile, Paul is rummaging through the videotapes in the cabinet above the table to my left. Yes, Gregg came on the bus, supposedly, to get some videotapes to watch.

Paul is handing Gregg tapes and Gregg drawls in that Southern way, “Thassa a good ‘un.” And I stand up and grab Gregg’s hand and shake it and say “thanks.” I know I mumble something about what a musical hero he is and his brother was to me. (Number one reason I play guitar, Clapton #2.)  For the record, Gregg’s tall, maybe 6 feet. I’m about 5’10.

He says, to all of us, “I just wanted to thank you folks for comin’ on the bus and followin’ us around. In case nobody’s told you before, we really appreciate it.” Paul says something like, “Thanks for letting us be part of the family.” And just like that, Gregg is gone. Word has by now spread and the rest of the party comes running. But it’s too late. Ron says, “Gregg Allman was on this bus. Don’t forget that.” And we don’t.”

Memphis, TN. Beale Street Festival. The Allmans are headliners but by no means the only band appearing. (Dave Matthews, Joan Baez, Van Morrison. Not sure why I didn’t catch Van the Man.) Early in the day, we hit Sun Records, still there after all these years. Elvis. Sam Phillips. Shit. Damn. Small place but so epochal in its impact.

Elvis. We suddenly realize that we’re in the town where Graceland is. So a few of us go out there. You take a 15-minute bus ride from downtown to Elvis Presley Boulevard and there it is – Graceland, Graceland. Memphis, Tennessee. I’m goin’ to Graceland. Think of him what you will – King, movie star, bloated drug-addicted self-parody – he had an impact. “No Elvis, no Beatles,” John Lennon said.

Graceland, the building, is smaller than I expected and tackier than hell. Green carpets on the ceiling. That kind of tacky. ‘That’s what happens when you give a hillbilly money’, Kirk West told us later. I guess so. Pictures of Elvis with his daddy and mama are everywhere as are TV sets, seemingly in every corner. 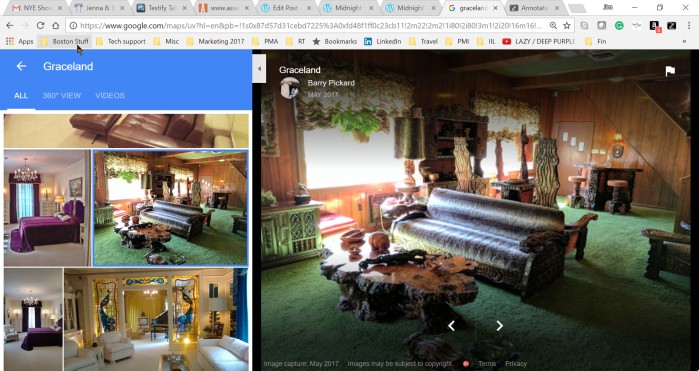 And you can’t help but be impressed by the row upon row of awards Elvis picked up. (As I recall, the picture of Elvis and Richard Nixon shaking hands was there. In perhaps the most ironic story in modern history, he told Tricky Dick he wanted to help “fight the war on illegal drugs.”)

His grave, along with those of his parents are out in front. The small house or shack out back where he died is still there. The place is preserved. Priscilla Presley runs the estate and she’s a sharp cookie, I’ll say that. Buses come and go into the night. Elvis died in 1977. He’s still the King. Ask Bruce. He (and Steve Van Zandt) tried to crash the place the previous year. Jumped the wall and ran to the front door. Security tossed them out.

We caught the show at the Beale Street Festival from the side of the stage in front of maybe 30-40,000 fans. Another stellar show. And since they did this song that night – and this was our last night – it seems appropriate to play “End Of the Line.”

Louisville, Kentucky. Early Sunday morning. Last day of the trip. I decided to walk over from the bus to the local Cracker Barrel restaurant. As luck would have it, drummer Jaimoe was walking in front of me. (Jaimoe, then Jai Johanny Johanson, was Duane’s first recruit for the band that would become the Allmans.) We both wandered around the gift shop looking at stuff. He looked over and nodded, recognizing me I guess from the week on the road.

We both wound up waiting for takeout so I figured well, might as well say something. “So after all these years how do you like life on the road?” “I don’t,” he said. “I love it.” Wouldn’t trade it for the world and couldn’t think of a better profession.

He talked about his love for jazz and how important that was to him. “But,” I protested. “You’re not playing jazz.” “Yes I am,” he said. “I play it every night.” I hadn’t thought about it that way but I guess he does. I was thinking of the Miles Davis type of stuff and he was talking about the spirit of it.

We bullshit about the life of a musician in general for a bit. I told him I gave it a shot once but it didn’t work out. He got that. Jaimoe talked to me straight up, with no discernible star attitude. When his food came, he looked me in the eye very sincerely, grabbed my hand with both of his and wished me well. What a gracious, soft-spoken humble person. 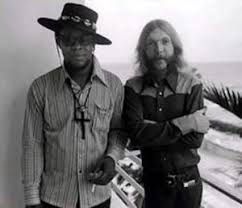 Monday morning, last day of the bus tour. We’re coming in to Atlanta and the trip is almost over. I wake up early and head to the front of the bus. Dave, the driver, is sitting there listening to Emmylou on the radio. I look out at the road. A light mist is coming down, “windshield wipers slappin’ time.” Kristofferson spent some time on the road, sure.

And suddenly we’re there. Back in Atlanta, Dave turns on the heat. Says it wakes everybody up. Best way, you know? Sure works because all of a sudden everybody is up and scrambling to get their gear and get off the bus. Party’s over.

Then we stand in the parking lot in Atlanta. “Did it really happen or did we dream it?” We pile up the leftover food in the parking lot where Ron’s wife will come by and pick it up later. We all hug, say our goodbyes and that’s it. It’s over for us.

And to think that all this started – for me anyway – by logging onto their web site to have a chat. And I wind up meeting not only a bunch of cool people but Jaimoe and Gregg Allman. Go figure.

Later that year, we went to see the band at Great Woods in Massachusetts. (Since six shows in one year is clearly not sufficient.) Now I’m sitting out in the audience just like the rest of the crowd where – let’s face it – I belong. I notice a couple of people onstage who won some radio contest to sit there.

Kirk West sets up their chairs on the side and I realize what a hassle it is for him and yet how hard he works to accommodate them. I also realize it’s the thrill of their lives. I know how they feel. I was on the bus, now I’m off it, back to reality. (“You’re either on the bus or off the bus” – Ken Kesey.) For them, and for the rest of us, the show will end in a couple hours, plus or minus an encore.

But for the guys in the band – and for all working musicians – the road goes on forever.

Note – Bassist Allen Woody and guitarist Warren Haynes at that time were two years into their side effort, Gov’t Mule. Allen died in 2000, cause unknown. Mule goes on.