I have written about my son Nick’s band, Pray for Sound, here and here. They bill themselves as a post-rock* band which – for the uninitiated –  Wikipedia defines as “a form of experimental rock characterized by use of rock instruments primarily to explore textures and timbre rather than traditional song structure, chords or riffs. Post-rock artists typically unify rock instrumentation with electronics and are often instrumental.

Although firmly rooted in the indie or underground scene of the 1980s and early 1990s, post-rock’s style often bears little resemblance musically to that of contemporary indie rock, departing from rock conventions. Elements may be borrowed from genres such as ambient music, krautrock, IDM, jazz, minimalist classical and dub reggae.”

Interestingly, and for reasons I can’t explain, the post-rock genre seems to be far more popular in Europe than it is in the States. In fact, the band played the dunk! Festival in Belgium (and US) last year and may be returning next year.

Anyway, I use the occasion of their latest opus, Waiting Room, to introduce – or reintroduce – you to their sound. Of this album, PFS says, “Waiting Room is a bit of a departure from our previous releases and is much more laid back and ambient. After returning from our European tour in 2017, we were excited to write new music together. Unfortunately, to us, our demos were sounding a lot like our previous records. We already did that and covered that sound.

We decided to temporarily take a step back and dive more into the world of synths and lo-fi ambience. These songs are a lot more stripped back. Some follow standard verse/ chorus structure. Some are built on a single part. We played with lots of different writing techniques and it helped reset our minds musically.”

I listened to this album a couple of times and yes, it is more ambient, quiet and somewhat hypnotic. This is not good-time party music. (My son’s other band, Color and Sound, does that.) This is lay back, smoke a j and relax-on-a-Sunday-morning music.

Here’s one with some nice acoustic guitar. It’s called “Trees.”

Now I would hardly expect you to rate this album highly or even at all despite your (doubtless) deep and abiding affection for the Music Enthusiast. But on a scale of 1 – 10, feel free to give it anything from 8 (I was gobsmacked by its beauty) to 10 (Makes Sgt. Pepper seem like a piece of crap.) 😂

You can find the album on YouTube and Spotify and buy it on Bandcamp if you’re so inclined.

*A fairly music-knowledgeable friend asked me why it’s called post-rock when any of a thousand genres could be called that. I have no idea, frankly. 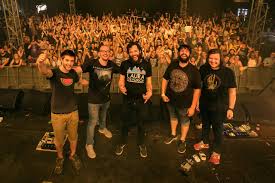