This blog is very much a music blog and not at all a travelogue. But I found our recent Grand Canyon vacation interesting enough that I thought readers might get a kick out of seeing some of what we saw. (Mouse over the above picture if you’re not seeing color.)

So the above graphic gives you a pretty good idea of where we went. For those of you familiar with the territory or have been out there, you’re doubtless asking yourself why we went to the Southwest in the summer when the average temperature is 105 degrees Fahrenheit (41 Celsius). Well, that’s when my wife gets off work so there’s that. Prices are a little cheaper for the trip as well.

This was our first bus tour as – being somewhat self-sufficient travelers – we had always groaned at the site of a bus tour. Now that we are older and more easily led, we realize it is the totally hip thing to do. 😊

First stop – Phoenix (overnight.) Only so much to do there especially in that kind of weather. We did visit the Botanical Garden which is interesting but eventually runs out of steam when you realize there’s only so many ways to look at cactus. The term “garden” is somewhat of a misnomer especially if you’re expecting roses or something.

The tour met at our hotel on a Friday night, 42 people of whom (oddly) some 25% were from the greater Boston area. Otherwise a mix of families, couples, a few grandmothers with granddaughters and one woman from the Netherlands traveling by herself. She did a pretty good job of mingling and engaging herself with everyone which I guess you gotta do if you travel alone.

The bus wasn’t full and so my wife and I grabbed seats by ourselves and just relaxed. Lesson number one about a bus tour – somebody else drives! This not only frees you up to listen to music, snooze or read, you also don’t have all that aggravation that comes with driving in a strange place, especially with your spouse. (“I TOLD you we should have taken that last exit!”)

You would think that would be self-evident but it never really dawned on me to that level till we were there. The only caveat is that the bus did not have Wi-fi and we spent a fair amount of time in the mountains with no signal. So much for my plans to listen to others’ Desert Island Discs on Spotify.

The tour director (late 60s?) was a really good guy and very good at his job (if somewhat guilty of overselling the quality of the dinners.) He had a Midwestern pastor style along with a naughty sense of humor that greased the wheels and made us laugh.

He played a selection of “road” songs going way back to Gene Autry. I found it humorous that he played John Denver’s “Country Roads” considering we were about 1700 miles (2784km) Southwest of there but ok. I’ve always liked this one though:

We drove through a well-preserved classic Old West town called Scottsdale and stopped for lunch at a town named Sedona about 100 mi (160km) north of Phoenix. Sedona is one of those artsy little towns with nice cafes that it would be great to visit again given more time.

And then on to the Grand Canyon! Which, BTW, turned out to be a big hole in the ground! We got there at the end of the day and jumped out to get a quick view. I suppose they do this because we’ll all feel cheated if we don’t see it right away. Me, I could have used a break.

But I did take a very brief video. The voice you will hear narrating on the recording is moi. I might sound sedated but maybe I’m awed, maybe I’m amazed, maybe I’m just tired and subdued.

We spent the next day exploring the Canyon. Over and above its grandness, one thing really amazed me – that when you get up there (we were on the South Rim) there are no fences, guardrails, signs, forest rangers or anything else preventing you from plunging 1000 ft to your death. (Other than what you saw in that video). It is the wide open spaces and you can look around and see people all over way out on the rocks.

Consider this guy. One good gust of wind – gone. (I would NOT recommend bringing little kids here.)

If you want to go to the bottom of the Canyon they have burro rides. OR, you can hike. (No vehicles.) Completely at your own risk. I saw something on the Weather Channel that explains how it just gets hotter and hotter (recall it’s already 100 degrees F) the further down you go. If you try to come back up on the same day, well, good luck. That’s why most people take a day or two.

Before the trip, I had some half-baked idea that we would spend every night staying in rustic cabins in the woods. We did stay at a lodge inside the Canyon but it was a small hotel, an adjunct to the larger one. The two ladies from St. Louis across from us found a mouse in their room. Not a bad place, not 4-star either. The tour director kept promising us this “awesome barbeque” for dinner. He really kept selling it all throughout the ride up.

When we got there it was neither awesome nor a BBQ. In fact, it was a rather pedestrian banquet-style dinner. (On the Caravan trip, they provide you with all breakfasts and two dinners. I didn’t mind that as it gave us the freedom to explore other foods and get away from the tour bus crowd every once in a while.) One disappointment is that even though we had a couple of really good meals, I didn’t really get a sense of Southwest food. We ate Mexican once and it was just like I get it anywhere else.

I don’t recall who we ate with the first night, probably the two widows from St. Louis who were traveling together. They told us excitedly how they had gone to Trump Tower when he was elected and other fascinating things about our fearless leader. In the spirit of comity and because I was on vacation I bit my tongue and maneuvered the conversation somewhere else.

Now here’s a really cool thing – we later went on a “Jeep” (really a motorcoach) tour to Monument Valley which is on the Arizona-Utah border. You would recognize it since director John Ford filmed several of his movies there. Per Wikipedia, “its five square miles [13 square kilometers] have defined what decades of moviegoers think of when they imagine the American West.”

This place is dry and hot but quite exciting to experience. You could, should you be so inclined, have your picture taken on a horse. Our Dutch friend did so and we took a picture to send her. The tour director had told us that the majority of people we would encounter would not be American citizens. (It took me all week to figure out that Americans – unless they have to – don’t go in August because it’s too hot and Europeans go as that’s when they have vacation.)

Apparently some Europeans – I’m told notably Germans – are fascinated by the American West. Alas, if you’re going there to witness a gunfight or something you are at least 100 years too late. When we got back on the bus, they showed us the John Wayne movie She Wore a Yellow Ribbon and we saw all the vistas we had just witnessed in person. (You can’t walk five feet in this area without encountering a Wayne reference.)

One last note on this – yeah it was HOT but as the people out there are fond of saying, it’s a DRY (low humidity) heat. But hot is hot. The bus had an endless supply of water bottles and we couldn’t drink enough. I should also say as someone who grew up in the Northeast US (Philly, NYC, Boston), it’s a real culture shock to imagine growing up out in the West.

Next – Lake Powell; Bryce and Zion Canyons. And Lost Wages! 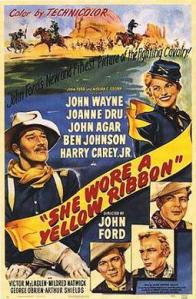