I should mention that much of the territory we covered on our Grand Canyon trip included Navajo Nation which, per the last census, was comprised of 350,000 people. In fact, our trip to Monument Valley was led by Navajo guides and we, of course, visited Native American gift shops. (Conveniently, all of our rest stops somehow wound up at gift shops.)

I think our oddest visit was to a Burger King which houses – I am not making this up – a museum* in the middle of Somewhere, Arizona dedicated to Native American code talkers. Code talkers – for the uninitiated – used Native American language for cryptography during WWII. The Navajo code talkers were largely Marines and it was said that, “Were it not for the Navajos, the Marines would never have taken Iwo Jima.”

My first post summarized the first four days of an eight-day trip. On the fifth day, we made our way to Lake Powell which is a reservoir on the Colorado River on the border between Utah and Arizona. Lake Powell was created by the flooding of Glen Canyon by the Glen Canyon Dam. (We visited that dam as well but I’ll instead focus on the Hoover later in the piece.)

(My wife looking out over Lake Powell.)

If you want to know something about the development of the American West – over and above, say, Gunfight at the OK Corral – start with the water. I cannot stress to you enough how important the Colorado River is. Wikipedia: “The 1,450-mile-long (2,330 km) river drains an expansive, arid watershed that encompasses parts of seven U.S. and two Mexican states.

Known for its dramatic canyons, whitewater rapids, and eleven U.S. National Parks, the Colorado River, and its tributaries are a vital source of water for 40 million people. (Italics mine.) The river and its tributaries are controlled by an extensive system of dams, reservoirs, and aqueducts, which in most years divert its entire flow for agricultural irrigation and domestic water supply.

Its large flow and steep gradient are used for generating hydroelectric power, and its major dams regulate peaking power demands in much of the Intermountain West.”** (For the record, the Colorado also carved the Grand Canyon.)

They took us out on a cruise on Lake Powell for about 1 1/2 hours. Very nice run and it turns out a fair amount of people kayak and canoe down the thing, sometimes in the wake of boats.

We had the rest of the day to ourselves and so in the afternoon, caught a nap (very important when you’re traveling I think) and then made our way down to the campground to do laundry. (And missed the last shuttle but caught a ride back from a kindly woman in the variety store who took pity on us.)

Next day – Utah. We hit both Bryce Canyon and Zion National Parks. Both are impressive but my wife and I both felt that Bryce in its own way was almost as spectacular as the Grand Canyon.

Bryce has a walk that goes down into the canyon and then loops back up. The bus driver told us that if we wanted to do it we had a couple of hours including lunch. Which set up this weird competition among some people on the bus to say they did it. It was still super-hot so we walked partway down, took a break and came back up. Some guy passing us asked us if we wanted our picture taken. I said no but could you call me an Uber?

Later that day we headed to Zion Park (75 miles/120km SW) to take that scenario in. There is only one hotel (Zion Lodge) in this park and we stayed there. This was the first time we actually stayed in a (sort of) rustic hotel during our trip. As nice as Zion was, we didn’t find it as spectacular as the other ones. Or maybe we were just “canyoned out,” don’t know. But this is NOT to say we didn’t enjoy it. We very much did and took a hike down a mountain trail. 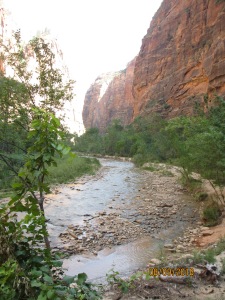 For our last two nights of dinner, we sat with a couple from South Carolina who were in their late ’70’s. They were both widowed and were pretty much just companions. The poor guy had had his knee replaced four months prior and his doctors had reassured him that he’d be able to walk ok.

Alas, it wasn’t true. He probably should have canceled his trip, as he wound up spending the better part of it in his room watching TV. (“He’s a nice guy but I don’t want to spend the rest of my life taking care of him,” the woman advised us before she went out for a smoke. Another human interest story.)

After a group picture, we jumped onto the bus and made our way to our last stop, Las Vegas.*** Most people were going home but my wife had never been there so we figured we’d end the trip in big style at the MGM Grand. (Stevie Wonder was in town and staying at the same hotel. We found this out by accident as the doors opened on his floor and he was walking by! I wanted to run out and say, “Stevie! You’re my biggest fan!” but I’m advised that actually accosting celebrities is largely frowned upon.)

Having only two days to spend in Vegas, we wanted to make the most of it. We checked in and took a walk up the Strip which I think it’s fair to say is the anti-nature – gawdy hotels and casinos and a mass of humanity. We walked up to the Bellagio to see the fountains but they weren’t turned on then. Never did see them. We did see a Cirque du Soleil show that night and it was excellent. And yes, I wanted to see the Beatles’ LOVE but my wife is deathly sick of them. Next time. 😦

Later I went gambling while my wife did the pool and spa thing. Personally, I love to play blackjack and I practiced it on a phone app. I’m happy to report my long-term strategy is working. I lose money, thereby lulling the casino into a false sense of security. Next time I go back and they say, “Here comes that sucker,”  – BAM! I clean them out!

On the last full day in Vegas, we caught a motorcoach bus trip to the Hoover Dam which is about a 40-minute ride south of town. When the bus came to our hotel, who was on it but a Boston family from the Canyon trip we had just departed?

Wikipedia again: “Hoover Dam is a concrete arch-gravity dam in the Black Canyon of the Colorado River, on the border between the U.S. states of Nevada and Arizona. It was constructed between 1931 and 1936 (two years ahead of schedule – ME) during the Great Depression and was dedicated on September 30, 1935, by President Franklin D. Roosevelt.

Its construction was the result of a massive effort involving thousands of workers, and cost over one hundred lives.” That’s the official count. Our guide told us your death only counted if you died on-site. At the hospital? Not so much. I can find no evidence the actual number was significantly higher but it could have been as much as up to 150-200 based on what I’ve read. And no, no one is actually buried in the concrete.

The guide also told us that 50% of the water goes to California, 25% to Nevada and 25% to Arizona. This was based on their respective abilities to fund the dam during the depression. The guide also told us that Nevada at that point had not counted on Las Vegas’ growth which is surprising when you discover that casino gambling was legalized in Nevada in 1931, the exact same year they started building the dam.

Here’s a brief video I took showing the panorama of the dam. That sound you’ll hear is the wind rushing by. (I should say here that all tour guides are a little too fond of making damn dam jokes):

Someone who saw some of my pictures on Facebook and was going to Vegas asked if  Hoover Dam was worth going to and I said yes, very much so. Just learning about the challenges of designing and building this monster alone is a great education. In fact, if you have the ability to make this Southwest trip, I hope I’ve inspired you to consider it. It’s quite the experience. You can, of course, do this entire trip yourself just by renting a car and mapping out the areas to visit.

But alas, all vacations must come to an end. And so, after a nice Italian dinner that night at some Vegas restaurant whose name I frankly can’t remember, we caught a good night’s sleep and got back to the airport early where we met that same family from Boston.

BTW, there is NO coffee maker in the MGM Grand rooms. My speculation is that this is because you then have to go downstairs and buy it from, say, a Starbucks who, of course, pay MGM for a license.

Fortunately, if you are in the mood for a Coke or something you can buy one from the mini bar they’ve thoughtfully put in your room. For eight bucks. (Be careful – it turns out the mini bar’s (a fridge really) contents are on sensors so if you pick something up to look at it, they flag it as ‘bought’ until you go to the desk and bitch about it. (“No, Ms. Desk Clerk, I did NOT buy the 40-dollar ‘love can.’ I merely looked at it for my own, shall we say, amusement and edification.”)

And that’s what we did on our summer vacation. We tend to do something bigly like this every 3 or 4 years, time and money depending. Next year? Well, if the good Lord is willin’ and the creek don’t rise, I’ll have my feet in a wading pool in the backyard, be reading a good spy novel, and be drinking a few vodka martinis.

*The Burger King is owned by the son of a code talker. Good for them but don’t these guys deserve more?

**Water is precious. I couldn’t help but think about the movie Chinatown whose plot is largely based on the California water wars which occurred in the early 20th century. 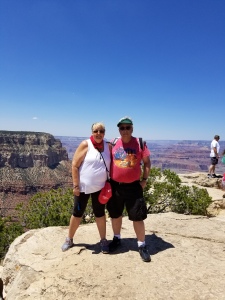 (I’m reasonably sure our wills are up-to-date.)