I’ve had Bessie Smith on my to-post list forever but had not gotten around to writing it. But I went to an event that catalyzed me into finally posting. That event will be Part 2, probably tomorrow. And if you like this one, you won’t want to miss that one.

Minstrel show – an indigenous American theatrical form, popular from the early 19th to the early 20th century, that was founded on the comic enactment of racial stereotypes. The tradition reached its zenith between 1850 and 1870. Although the form gradually disappeared from the professional theaters and became purely a vehicle for amateurs, its influence endured—in vaudeville, radio, and television as well as in the motion-picture and world-music industries of the 20th and 21st centuries.

The earliest minstrel shows were staged by white male minstrels (traveling musicians) who, with their faces painted black, caricatured the singing and dancing of slaves. Scholars usually distinguish this form of the tradition as blackface minstrelsy. – Britannica. (Another triumph of American race relations – ME.)

Wikipedia: “Bessie Smith (April 15, 1894 – September 26, 1937) was an American blues singer. Nicknamed the Empress of the Blues, she was the most popular female blues singer of the 1920’s and 1930’s. She is often regarded as one of the greatest singers of her era and was a major influence on other jazz singers.” At the show I went to, several people referred to her as the Beyoncé of her day, not in style but in massive popularity.

As near as anyone can tell, Bessie Smith was born in Chattanooga, Tennessee in July 1892 or 1894. Her father was a part-time Baptist preacher who died when Bessie was very young. It probably goes without saying that a young black girl in the early part of the Twentieth Century wasn’t sitting around drinking champagne and eating caviar. So Bessie and her brother Andrew started performing on the streets of Chattanooga where she sang and danced and her brother played guitar.

In 1912, when Bessie was 18, her older brother Clarence – who had joined Moses Stokes’ traveling minstrel show – returned to Chattanooga. Bessie joined the troupe as a dancer as they already had a great singer named Ma Rainey. Rainey made over 100 recordings, including “Bo-Weevil Blues” (1923), and “See See Rider Blues” (1924). (Rainey co-wrote “See See Rider” which has been covered by just about everybody.) Ma – who became a mentor to Bessie –  later recorded with Louis Armstrong.

Smith’s recording career began in 1923 with Columbia Records. Wikipedia:  She once auditioned for Black Swan records (W. E. B. Du Bois was on its board of directors) and was dismissed because she was considered too rough, supposedly stopping singing to spit. (My kind of woman -ME). In fact, even her admirers, white and black, considered her a “rough” (i.e., working class or even “low class”) woman.”

Marrying at the then-ancient age of 29, she was living in Philadelphia when her first record was released. This early part of the Twentieth Century was a fertile time for the blues, especially for black female blues singers. A song called “Crazy Blues” by an unrelated singer named Mamie Smith sold over 100,000 copies, leading record execs on a frantic search for the next hot ticket.

Bessie sang in a variety of minstrel shows, her popularity increasing along the way. Her first recording was “Downhearted Blues/Gulf Coast Blues.” They sold 780,000 copies in the first six months, and eventually 2 million copies were sold. In the words of biographer Chris Albertson, “Bessie had a wonderful way of turning adversity into triumph, and many of her songs are the tales of liberated women.”

According to Redhotjazz: “Throughout the 1920’s Smith recorded with many of the great Jazz musicians of that era, including Fletcher Henderson, James P. Johnson, Coleman Hawkins, Don Redman and Louis Armstrong. Her rendition of “St. Louis Blues” with Armstrong is considered by most critics to be one of finest recordings of the 1920’s.”

Bessie was the highest-paid black entertainer of her era, appealing to both black and white audiences. She headed her own shows which “sometimes featured as many as 40 troupers, and toured in her own custom-built railroad car.

Her marriage was stormy with infidelity on both sides, including numerous female lovers for Bessie. (From what I’ve read, this was not uncommon among the female blues singers – ME.) Her husband was impressed by the money but never adjusted to show business life or to Smith’s bisexuality. In 1929, when she learned of his affair with another singer, Smith ended the relationship, although neither of them sought a divorce.”

Now, you’ve doubtless heard that some of these old blues singers performed songs that were, well, shall we say, salacious. Perish the thought! Why, here’s Bessie singing about her “Kitchen Man” and how he regularly stocks her shelves and delivers the goods. Any misinterpretation is entirely on you:

When I eat his doughnuts
All I leave is the hole
Any time he wants to
Why, he can use my sugar bowl

What ultimately brought Bessie’s career to a slowdown, if not a complete stop, was the Great Depression when record companies nearly went out of business, coupled with the fact that times had changed and popular tastes had moved on.

With the advent of “talkies,” vaudeville had started to lose its luster. Columbia dropped Bessie from the label. She continued to tour the South, making money if not as much as in the ’20’s. She recorded a few sides for the legendary producer John Hammond on the Okeh label. Using the same band, Billie Holiday made her first recordings a few days later.

I am going to leave the entire story of Bessie’s death intact from Wikipedia as it has always been controversial and misunderstood: “On September 26, 1937, Smith was critically injured in a car crash while traveling along U.S. Route 61* between Memphis, Tennessee, and Clarksdale, Mississippi.

Her lover, Richard Morgan, was driving and misjudged the speed of a slow-moving truck ahead of him. Tire marks at the scene suggested that Morgan tried to avoid the truck by driving around its left side, but he hit the rear of the truck side-on at high speed. The tailgate of the truck sheared off the wooden roof of Smith’s old Packard. Smith, who was in the passenger seat, probably with her right arm or elbow out the window, took the full brunt of the impact. Morgan escaped without injuries.

The first people on the scene were a Memphis surgeon, Dr. Hugh Smith (no relation). In the early 1970s, Smith gave a detailed account of his experience to Bessie’s biographer Chris Albertson. This is the most reliable eyewitness testimony about the events surrounding her death. After stopping at the accident scene, Hugh Smith examined the singer, who was lying in the middle of the road with obviously severe injuries.

He estimated she had lost about a half pint of blood and immediately noted a major traumatic injury to her right arm; it had been almost completely severed at the elbow. He stated that this injury alone did not cause her death. Although the light was poor, he observed only minor head injuries. He attributed her death to extensive and severe crush injuries to the entire right side of her body, consistent with a sideswipe collision.

Henry Broughton (a fishing partner of Smith’s) and Smith moved the singer to the shoulder of the road. Smith dressed her arm injury with a clean handkerchief and asked Broughton to go to a house about 500 feet off the road to call an ambulance. By the time Broughton returned, about 25 minutes later, Bessie Smith was in shock. (Did anybody think to ask why it took 25 minutes to go 500 feet and return? – ME). Time passed with no sign of the ambulance, so Hugh Smith suggested that they take her into Clarksdale in his car.

He and Broughton had almost finished clearing the back seat when they heard the sound of a car approaching at high speed. Smith flashed his lights in warning, but the oncoming car failed to stop and plowed into his car at full speed. It sent his car careening into Bessie Smith’s overturned Packard, completely wrecking it.

The oncoming car ricocheted off Hugh Smith’s car into the ditch on the right, barely missing Broughton and Bessie Smith. The young couple in the new car did not have life-threatening injuries. Two ambulances arrived on the scene from Clarksdale, one from the black hospital, summoned by Broughton, the other from the white hospital, acting on a report from the truck driver, who had not seen the accident victims.

Bessie Smith was taken to the G. T. Thomas Afro-American Hospital in Clarksdale, where her right arm was amputated. She died that morning without regaining consciousness. After her death, an often repeated but now discredited story emerged that she had died as a result of having been refused admission to a whites-only hospital in Clarksdale.

John Hammond gave this account (of her being refused at a whites-only hospital) in an article in the November 1937 issue of Down Beat magazine. The circumstances of Smith’s death and the rumor promoted by Hammond formed the basis for Edward Albee’s 1959 one-act play The Death of Bessie Smith.

“The Bessie Smith ambulance would not have gone to a white hospital, you can forget that,” Hugh Smith told Albertson. “Down in the Deep South cotton country, no ambulance driver, or white driver, would even have thought of putting a colored person off in a hospital for white folks.” (Yeah, but your whole story sounds a bit self-serving, eh, doc? – ME.)

Smith’s funeral was held in Philadelphia a little over a week later, on October 4, 1937. Her body was originally laid out at Upshur’s funeral home. As word of her death spread through Philadelphia’s black community, the body had to be moved to the O.V. Catto Elks Lodge to accommodate the estimated 10,000 mourners who filed past her coffin on Sunday, October 3.

Contemporary newspapers reported that her funeral was attended by about seven thousand people. Far fewer mourners attended the burial at Mount Lawn Cemetery, in nearby Sharon Hill. Jack Gee (her husband) thwarted all efforts to purchase a stone for his estranged wife, “once or twice pocketing money raised for that purpose.”

Smith’s grave was unmarked until a tombstone was erected on August 7, 1970, paid for by the Janis Joplin (two months before her death) and Juanita Green, who as a child had done housework for Smith. It reads, “The Greatest Blues Singer in the World will Never Stop Singing.”

Three recordings by Bessie Smith (“Downhearted Blues,” “Empty Bed Blues,” “St. Louis Blues,”) were inducted into the Grammy Hall of Fame. “Downhearted Blues” was included in the list of Songs of the Century by the Recording Industry of America and the National Endowment for the Arts in 2001. It is in the Rock and Roll Hall of Fame as one of the 500 songs that shaped rock ‘n’ roll. 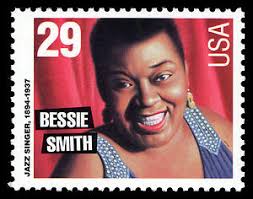 HBO did a movie called Bessie in 2015 starring Queen Latifah as Bessie and Mo’Nique as Ma Rainey. By the following year Bessie stood as the most watched HBO original film of all time. The film was well received critically and garnered four Primetime Emmy Awards, including Outstanding Television Movie.

13 thoughts on “Bessie Smith, Empress of the Blues (Part 1)”