“I wasn’t particularly interested in the blues. I was more interested in Stax, Motown, that sort of thing. But Jimmy promised something a little different from a regular, one-style blues band. – John Paul Jones.

“John Bonham played the drums like someone who didn’t know what was going to happen next—like he was teetering on the edge of a cliff. No one has come close to that since, and I don’t think anybody ever will. I think he will forever be the greatest drummer of all time.” – Dave Grohl.

As mentioned previously, Jimmy Page and John Paul Jones (née John Baldwin) had worked together on sessions and Jones was the bass player on “Beck’s Bolero.” Tiring of session work and enjoying playing with Page, on hearing that the guitarist needed a bass player for the New Yardbirds, he approached Page who readily accepted.

Said Page, “I was working at the sessions for Donovan’s Hurdy Gurdy Man (recorded November ’67 to April ’68), and John Paul Jones was looking after the musical arrangements. During a break, he asked me if I could use a bass player in the new group I was forming. He had a proper music training, and he had quite brilliant ideas. I jumped at the chance of getting him.”*

John Bonham came to Jimmy’s attention from a number of fronts. Firstly, he was an old West Midlands mate of Robert Plant’s having played together with him in an ensemble called the Band of Joy.

Secondly, he’d heard about Bonham – “Bonzo” they called him –  from the (apparently) omniscient Terry Reid. So Page again made his way up to the Black Country. He heard Bonham play a solo and within a few minutes knew he had his drummer. (Other possible candidates were Procol Harum’s B.J. Wilson, Ansley Dunbar and Mitch Mitchell who was still with Hendrix. Dunbar might have been Hendrix’ drummer but for a coin toss.)

Page called up manager Peter Grant and advised him that, “I saw a drummer last night and this guy plays so good and so loud, we must get him.” A killer drummer. “Hooligan,” as the lads liked to say. Clearly, Bonham had his pick of bands but Grant and Page courted him (“Unlike any band you’ve ever been in!”) and at the end, he decided he liked Page’s music better. And so, the New Yardbirds were born.

Wikipedia: “The four played together for the first time in a room below a record store on Gerrard Street in London. Page suggested that they attempt “Train Kept A-Rollin'” … which had been covered by the Yardbirds. “As soon as I heard John Bonham play,” Jones recalled, “I knew this was going to be great … We locked together as a team immediately.”

Before leaving for Scandinavia, the group took part in a recording session for the P. J. Proby album, Three Week Hero. (Proby is a Texan who had made his way to England with some level of success – ME.) The album’s track “Jim’s Blues,” with Plant on harmonica, was the first studio track to feature all four future members of Led Zeppelin. You can listen to it here if you’re so inclined.

The New Yardbirds played their first gig at the Teen Club, a school gymnasium in Gladsaxe, Denmark on September 7, 1968. It was the first stop on a brief 13-date tour that took them from Denmark to Sweden to Norway, ending on September 24th. 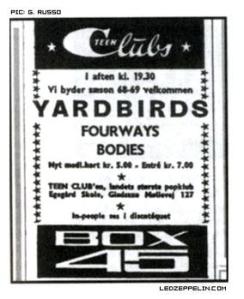 The setlist was a pastiche of old blues, Yardbirds tunes and a few originals. It included “Train Kept A-Rollin’,” “You Shook Me,” “Communication Breakdown,” “For Your Love,” etc. Essentially like so many bands, much of their live act would become their debut album.

And guess what? This thing was broadcast on TV to what Rolling Stone calls a “very polite audience.” Check it out:

I found an audio clip of Zep playing a long-forgotten festival in 1969 called the Texas International Pop Festival. (Check it out – hell of a lineup. A bargain at six bucks a day. if tickets went up with inflation instead of pure greed, that ticket today would cost $42. But instead, it’d probably be more like $700.)

Odd that the band performed at that show since it was a couple weeks after Woodstock and Peter Grant had kept them out of that extravaganza so they wouldn’t be just any other band. I’m jumping ahead chronologically but I think it’s important to hear what the New Yardbirds must have sounded like a scant year prior:

Plant also recalled that “in Scandinavia, we were pretty green; it was very early days and we were tiptoeing with each other. We didn’t have half the recklessness that became for me the whole joy of Led Zeppelin. It was a tentative start.” In fact, it’s interesting to note that Page wasn’t yet 100% sure about his lead singer. He knew he could sing that was certain. But how would he be as a frontman? Or for that matter, a songwriter? Did Plant have those chops?

And then there was the issue of the band name. Per Page, “We realized we were working under false pretenses, the thing had gone quickly beyond where The Yardbirds had left off. We all agreed there was no point in retaining the New Yardbirds tag so when we got back from Scandinavia we decided to change the name [of the band]. It was a fresh beginning for us all.”

Like much of what Page says and does, that statement is half truth, half bullshit. The Yardbirds actually sent Page and crew a cease and desist letter, reminding them that the use of the name Yardbirds was for the Scandinavian tour only. Since the threat of litigation seems to be the only thing that crystallizes Pagey’s mind on these pesky legal details, he realized he’d best change the name.

He thought back to Keith Moon’s observation that a Page/Beck band would go down like a lead balloon. Playing around with that concept, he and Grant changed it to Lead Zeppelin, then Led Zeppelin so it wouldn’t sound like lead guitar. Page liked the light/heavy idea of band heaviness, light zeppelin, a metaphor almost for their music. And thus, out of the ashes of the New Yardbirds was born the Phoenix of Led Zeppelin.

Wasting no time – and not yet having a label – Jimmy herded them into a studio to record their first album. (Olympic Studios where Beggar’s Banquet had recently been recorded.) He funded the entire thing himself with proceeds from his session work. (Cost £1782 or roughly £27,000 ($36,000) in today’s dollars.)

The band started recording in September 1968 and – like so many first albums in those days – it took all of 36 hours. (But as we’ve seen, studio time ain’t cheap.) Page produced the album and it was engineered by the (now) legendary Glyn Johns.** As noted earlier, it was more or less a recording of the New Yardbirds live set with “a mix of original material worked out in the first rehearsals, and covers and rearrangements of contemporary blues and folk song.”

Now all they needed was a label to release the thing on and they would be off and running. And Peter Grant, recognizing that their brand of music would go over well in America wanted to target an American label. And in the band’s opinion, the one label that they most admired was the one that specialized in black music, specifically rhythm and blues.

That label, home to – among others –  Aretha, Ray Charles, and Cream – was Ahmet Ertegun and Jerry Wexler’s Atlantic Records.

*Ronnie Wood, Beck’s bass player, had also been approached. But by his own admission, he was not only tired of playing heavy music he wanted to get back to guitar. “And anyway,” he said, “there was only ever going to be one guitarist in a group like Zeppelin and it wasn’t going to be me.”

**Glyn Johns has worked with everybody and his cousin. A short list of artists he worked with includes the Stones, Small Faces, Steve Miller, Bob Dylan, The Who. His family is musical – he is the father of producer/songwriter Ethan Johns, brother of late producer Andy Johns (Exile on Main Street, Marquee Moon, Zep II, III, IV, Physical Graffiti) and the uncle of guitarist Will Johns who I recently saw in the 50th Anniversary Cream tour. (Clapton is another uncle. Will’s the son of Pattie Boyd’s sister Paula.) Johns has written a book I will eventually get around to reading called Sound Man about his own adventures in rock ‘n roll.