“With a voice pitched somewhere between choirboy and hellspawn, group mastermind Billy Corgan never resembles any type of weirdo you remember from high school. He’s a six-foot-three space alien whose band throws down like Guns N’ Roses on a My Bloody Valentine trip.” – Billboard on Gishs’ 25th anniversary.

“The album is about pain and spiritual ascension. People ask if it’s a political album. It’s not a political album, it’s a personal album. In a weird kind of way, Gish is almost like an instrumental album—it just happens to have singing on it, but the music overpowers the band in a lot of places. I was trying to say a lot of things I couldn’t really say in kind of intangible, unspeakable ways, so I was capable of doing that with the music, but I don’t think I was capable of doing it with words.” -Billy Corgan.

Well, if you want a band you either love or hate, I got one for ya. And that may well revolve around whether or not you think Billy Corgan is or is not a dick. He’s certainly somewhat of a control freak. But while I’m nowhere near being a gigantic fan of Smashing Pumpkins, they are a band I enjoy when listening to them on the radio. And this is a worthy debut album. They have more well-known albums, but sometimes I like to dig a little deeper. A little bit of history is in order first.

Allmusic: “Though they emerged alongside grunge acts like Nirvana and Pearl Jam, the Smashing Pumpkins were the group least influenced by traditional underground rock. Headed by principal songwriter and frontman Billy Corgan, they fashioned an amalgam of progressive rock, heavy metal, goth, psychedelia, and dream pop, creating a layered, powerful sound driven by swirling, distorted guitars that churned beneath Corgan’s angst-ridden lyrics.

After the success of 1993’s Siamese Dream, their presence extended to the mainstream with radio and video hits from their double album, Mellon Collie and the Infinite Sadness. After a misunderstood foray into electronic rock on Adore, Corgan issued a final pair of efforts before putting the group to sleep for an extended early-2000’s, a hiatus that ended with 2007’s Zeitgeist.”

Corgan hails from Chicago, US of A and for all intents and purposes, is Smashing Pumpkins, at least as far as driving vision is concerned. He wrote or co-wrote pretty much everything and at least on Gish, despite having competent players, played all bass and guitar parts himself. This led to much resentment and hurt feelings. (Why, then, even bother calling it a band? Just hire a bunch of side musicians and go out on the road that way.)

Corgan’s father was a blues/rock guitarist whose main advice was to listen to Jeff Beck and Jimi Hendrix. Corgan did that but he also dug Black Sabbath, Queen, Boston, ELO, Rush, Cheap Trick, Bauhaus and The Cure. (Smashing Pumpkins got a lot of heat from indie bands for playing hardcore metal sounds. The other side of it, of course, is that Corgan wanted indie credibility at the same time as he wanted mainstream success. Can’t you have both or do you have to starve to death to have indie credibility, one wonders?)

After kicking around in a few bands I don’t give a shit about, Corgan met guitarist James Iha in a record store and the two started doing “gloomy little goth-pop records.” They subsequently met bassist D’Arcy Wretzky and voila! – Smashing Pumpkins were born. Wretzky explained the band name thusly:

“The name of the band is a stupid name, a dumb bad joke and a bad idea, OK?” she says. “Billy named the band before there even was a band. He was like, ‘I’m gonna have a band and it’s gonna be called this.’ ‘Smashing’ is not a verb, it’s an adjective. It’s not like we like to smash pumpkins or anything.” So, smashing in the British sense. (“Oh, darling. I say. You look positively smashing!”)

The band had been using a drum machine (yuck!) but added jazz drummer and notorious drug-addict-to-be Jimmy Chamberlin.* On hearing Jimmy’s ferocious playing, Corgan suddenly realized the kind of power the Pumpkins could achieve.

Smashing Pumpkins recorded their 1991 debut studio album Gish** with producer Butch Vig at his Smart Studios in Madison, Wisconsin for $20,000. I’d say they got pretty lucky as Vig – also the drummer for the impeccably-named Garbage – is one of the most well-regarded producers in music. He either produced or co-produced Nevermind, a couple of Sonic Youth albums, Pumpkins’ Siamese Dream, Green Day’s 21st Century Breakdown and Foo Fighters’ Wasting Light and Sonic Highways.

Gish was released in May 1991, four months before Nevermind. This is where you first start to hear Corgan’s trademark buzzsaw guitar sound.

The first song, “I Am One,” will now proceed to pummel you:

Butch Vig: “(Corgan) wanted to make everything sound amazing and see how far he could take it, really spend time on the production and the performances. For me, that was a godsend because I was used to doing records for all the indie labels and we only had budgets for three or four days. Having that luxury to spend hours on a guitar tone or tuning the drums or working on harmonies and textural things … I was over the moon to think I had found a comrade-in-arms who wanted to push me, and who really wanted me to push him.”

According to one reviewer, “Window Paine” is “Link Wray’s classic 1958 rock ‘n’ roll instrumental “Rumble” tricked out with a soaring guitar solo and lyrics about overcoming darkness and shame. At 4:20, everything drops out, leaving Corgan to look himself in the mirror and brace for a new day.”

The band recorded this album in 30 days but it was a difficult journey. Wretzky stated that she wasn’t sure how the band survived it and Corgan told MTV that he suffered a nervous breakdown trying to finish. Reflecting on the album later, Corgan stated, “Gish represents our first foray into the deep waters of rock and roll. In the music within, I still hear our naiveté and fresh spirits asking to be heard, and I miss the times that helped make this music so earnest.”

This is why I sometimes like debut albums even though subsequent ones might be better. Bands are still fresh and finding themselves and are not yet worn down with all sorts of drama, bullshit and the weight of their own self-image.

Let’s end this stroll down memory lane with a song named after a Jack Kerouac novella called “Tristessa.” Play this loud, bitches:

I’ll spare you all the inevitable rock band bullshit but suffice it to say that this iteration of the band fought (with each other and with drug addictions) and lasted till 2000. Corgan didn’t speak to Wretzky or Iha for some 16 or so years. He also lived with Courtney Love for a couple of years and well, guess how well that went?

The original band, minus Wretzky, are on tour in Europe starting in May. Corgan reached out to Wretzky but, well, make of this what you will:

“Original bassist D’arcy Wretzky claimed she had been offered a contract to rejoin the band but Corgan rescinded the offer soon after. Corgan released a statement denying the claims, stating “Ms. Wretzky has repeatedly been invited out to play with the group, participate in demo sessions, or at the very least, meet face-to-face, and in each and every instance she always deferred.” Jack Bates (son of Joy Division bassist Peter Hook) will play bass on the tour. Bates previously toured with the Smashing Pumpkins in 2015.”

*”The band suffered a personal tragedy on the night of July 11, 1996, when touring keyboardist Jonathan Melvoin and Chamberlin overdosed on heroin in a hotel room in New York City. Melvoin died, and Chamberlin was arrested for drug possession. A few days later, the band announced that Chamberlin had been fired as a result of the incident.”

**”The album was named after silent film icon Lillian Gish. In an interview, Corgan said, “My grandmother used to tell me that one of the biggest things that ever happened was when Lillian Gish rode through town on a train. My grandmother lived in the middle of nowhere, so that was a big deal.” Later, Corgan joked that the album was originally going to be called ‘Fish’, but was changed to ‘Gish’ to avoid comparisons to jam band Phish.” 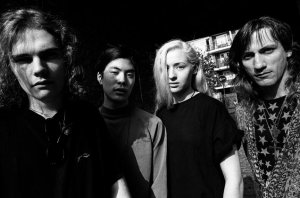