IMDb: A look at the roots of the historic music scene in L.A.’s Laurel Canyon featuring the music of iconic music groups such as The Byrds, The Beach Boys, Buffalo Springfield, and The Mamas and the Papas.

When I first heard about this documentary, I wasn’t initially keen on seeing it. While I liked the aforementioned bands, I was not as big a fan of that LA sound as I was of the San Francisco sound. And neither of these appealed to me as much as say, Chuck Berry, Stones, Beatles or blues. Frankly, it struck me as nice chime-y music that lacked anything resembling balls. Just a little too laid back.

And while frankly the appeal of the Byrds is somewhat lost on me, this still seemed like an important slice of rock history, especially since you only have to research rock for five minutes to read about tributes to Laurel Canyon. Which, to me, seemed a bit like an artist’s paradise.

But having said all that, I’m really glad I went to see it and enjoyed it quite a bit. Jakob Dylan is an executive producer and it runs out this is a collaboration between him and a guy named Andrew Slater who used to be a honcho over at Capitol Records. Slater – who used to manage Dylan – and Jakob sat down one night to watch a 1969 movie I have never heard of called Model Shop.

According to Wikipedia, “Apparently the directors caught it playing on Turner Classic Movies. The filmmakers consider it particularly evocative of mid-‘1960s sensibilities. It definitely embodies the feel of that era. Perhaps that’s why Don Draper is watching this movie in episode 7.3 [of Mad Men].”

Inspired by this film, in 2015 Dylan hosted a tribute concert to these bands in LA featuring artists such as Fiona Apple, Beck, Regina Spektor, Cat Power and Jade (who has a pretty amazing voice.) The film is set up to alternate between nostalgic interviews with the artists Who Were There and the younger musicians who grew to appreciate and be inspired by their music.

Dylan is the linchpin who holds the whole thing together, jamming with the various artists, interviewing the older ones, all of whom are pretty much friends of his father (which gives him access.) In one recurring sequence, Dylan, Cat Power, Beck, and Regina Spektor sing some of those artists songs and talk about their understanding of that era.

What made this flick work for me were the interviews with the stars of that era and hearing some of those old tunes. Poignantly, the movie starts with Jakob and Tom Petty (who really wasn’t part of that scene initially) hanging out in a guitar store discussing the proper pronunciation of Rickenbacker. 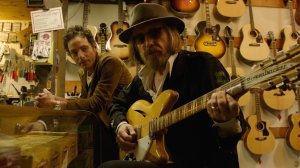 Because it was the Rickenbacker guitar, specifically the 12-string, that inspired Roger McGuinn which inspired other bands to get into what became known as folk-rock. McGuinn credits the Beatles (specifically George Harrison) for inspiring him to pick up the 12-string. Oddly, he doesn’t relate the fairly well-known story that he first saw George playing it in A Hard Day’s Night.

I like Dylan’s approach to the interviews which is basically to shut up, respectfully listen and not try to inject himself into the story. This gives the interviewees room to reminisce and talk about their experiences. It surprised me somewhat to see Eric Clapton interviewed as I associate him exactly zero with that time and place. But he dug these artists and met a lot of them when Cream was first touring the US.

Dylan: “Eric Clapton was the first person we sat with. Once Eric Clapton says yes, it becomes easier to approach other people. But when pitching the people in this film — all people we knew one way or another — we would send a bit of footage to show them that it was a real project and that we were going to respect them. We just wanted them to talk about whatever they wanted to recall about that time.”

Another poignant sequence involves the only surviving member of the Mamas and the Papas, Michelle Phillips, recounting how “California Dreaming” came to be or how she was a free spirit, essentially having an affair with lead singer Denny Doherty under her husband’s nose.

David Crosby reveals here for the first time why he was tossed out of the Byrds. Not because he wrote a song, “Triad,” about a menage a trois but because – in his own words – “I was an asshole.”

The influence of the Beatles hovers over this movie as – in addition to the Byrds – the Beach Boys are featured and Brian Wilson talks about the well-documented fact that Rubber Soul inspired Pet Sounds which in turn inspired Sgt. Pepper.

Missing conspicuously interview-wise from this film are Paul McCartney (Ringo is here) and Neil Young. And while I’m aware that this was a celebration largely of the community vibe of the Canyon that spawned bands, it puzzled me mightily that not one person mentioned Joni Mitchell who later named an album Ladies of the Canyon. Not even her one-time boyfriend Graham Nash mentioned her. Odd.

Last thing I’ll say is that I was struck by the absence of any people of color whatsoever either in this movie or apparently in this community. Having grown up on R&B, doo-wop and soul in Philly, maybe it was this lack of any kind of black influence that made so much of this music seem, well, kind of white bread.

Anyway, that aside, I dug the film even though it does kinda run out of steam and fresh ideas near the end. If you’re a fan of this music, this movie is a must-see. And if not, it’s still a good slice of rock and roll history.

27 thoughts on “Featured Documentary – Echo in the Canyon”