So if you meet me
Have some courtesy
Have some sympathy, and some taste
Use all your well-learned politesse
Or I’ll lay your soul to waste,

So here we are, my fourth (should be fortieth) Rolling Stones concert. I’ve seen two by myself, one with Mrs. Music Enthusiast and now this one with Sonny Boy. The “classic rock” bands he’s seen with me thus far have included The Who, Skynyrd and Marshall Tucker and  – for partial credit – a tribute band that included David Bowie’s producer and drummer.

Prior to going to the show, I’d been checking out the setlists of the three or four prior venues. While it was a serviceable list with all the usual hits, I was disappointed by the lack of deep cuts as well as the fact that they had (I thought) done NO blues. This from a band whose most recent album was a blues album! Fortunately, the Gods of Rock ‘n Roll heard my whinging and, well, I’ll get to that.

So how was it? Well, I can say honestly that it was a great show, full of – as we say here – piss and vinegar. The Stones were in fine form. And for a 75-year-old bloke who HAD A HEART VALVE REPLACED 3 MONTHS AGO, Mick Jagger moved like, well, Jagger. (Both the boy and I agreed that Keef looked rougher than usual, sometimes looking like he’d wandered in from the retirement home. Not smiling as much as usual, his playing kinda stiff.)

Highlight of the show? Well there were several. But to my great surprise, one of my least favorite Stones tunes, “Miss You,” turned out to be an ass-kicker. This song had been the Stones’ 1978 answer to disco. Jagger denied it but Keef said it was a “damn good disco record; it was calculated to be one.”

Here they are doing it from a previous show with a nice solo from bassist Darryl Jones at about 3:48. To make the year’s greatest understatement, I am no disco fan. But whatever you wanna call this, it’s got some punch:

Nick said he got “chills” when the band first came out. I had given him a playlist which he checked out and dug. It’s exciting for him to see these classic bands that have been around since long before he was on this earth and who will clearly outlive all of us.

The poor kid was surrounded by my fellow baby boomers, most of whom looked like they were on an excursion from a cruise ship and who had spent their spare cash on shiny new Stones tongue T-shirts. (I went totally contrarian with another well-known band’s shirt.)

“Midnight Rambler” may well be my favorite Stones song ever. No matter how many times they play it, it remains inherently evil, a blues from the crossroads that Robert Johnson might have written had he lived long enough. Keef fucks up at one point by coming back into the fast part too early; I fuck up at the end of the video by cutting it off a tad too early. What can I say? Time is not on our side:

The opening act was none other than blues/rock firebrand Gary Clark, Jr. (Previous opening acts I’ve seen were Sheryl Crow, Pretenders, Black Eyed Peas.) Now, I’ve been aware of Clark for a while but haven’t really followed him closely. I had always understood him to be primarily a blues guy. But based on last night, I found him to be much more in a Lenny Kravitz vein, kinda soulful rock with a blues feel.

He never at any point did a real blues and alas, while he somewhat won over the golf, bingo and knitting crowd with his muscular playing, for me he never really got out of 2nd gear (or for that matter, strangely, never varied the song choices beyond mid-tempo).

I think Clark is a fine player though and I’m pleased to say that the Stones brought him up for “Ride ‘Em On Down,” a blues they did on Blue and Lonesome. (And which, further research reveals, they also did in Chicago which is, of course, only fitting.) I by no means think the Stones should do an entire night of blues. But two or three of these would make me a very happy camper indeed. And if they announced a blues tour, I’d be first in line. Disco aside, they are essentially a blues band.

Here’s my other favorite Stones tune, “Brown Sugar.” For pure rock and roll, you cannot beat these guys or this song. This is my problem with a lot of rock today and in the past few years. It just doesn’t excite me like this. (Guys, move “Satisfaction” to earlier in the set and make this the encore.):

I’ll leave you here with “Sympathy for the Devil,” a song Mick wrote for Beggar’s Banquet many moons ago. It was inspired by a novel Marianne Faithfull gave him called The Master and Margarita. The story “concerns a visit by the devil to the officially atheistic Soviet Union.” More evil:

These shows cost a lot of money these days. Was it worth it? Sure, every penny. That said, even a music junkie like me has to draw the line somewhere. So I am passing on Queen, Santana and myriad others because well, I’m kinda burnt out on these live shows. I don’t have any lined up right now and I’ll probably be very choosy going forward. That said, I’ve already prepped Sonny for the next Springsteen four-hour extravaganza.

Because after all, it’s only rock ‘n roll. But goodness gracious I do enjoy it. 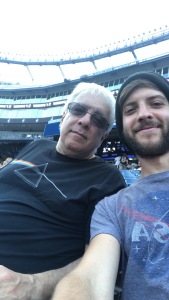 Street Fighting Man
It’s Only Rock ‘n’ Roll (But I Like It)
Tumbling Dice
She’s So Cold (by request)
Ride ‘Em on Down (Eddie Taylor cover) (with Gary Clark Jr.)