I don’t know about you but I’m always fascinated when I find out that a song is based on a real incident. Or that maybe it’s not and yet there’s some interesting facts behind the writing and/or creation of a song.

And so I thought I would start a new series of occasional posts that would tell those stories. I typically always tell the story or stories when I do a post about a song or album. This is the first time I’ll start focusing on the stories themselves. Apologies to any bloggers that might be doing this already but I don’t think anyone’s doing it that consistently.

In December of 1971, the British band Deep Purple were in Montreux, Switzerland to record their upcoming album Machine Head. They were going to record it at the Montreux Casino, using cables snaked out to a Rolling Stones-owned mobile studio.

Frank Zappa* and the Mothers of Invention were playing the night before and so the band went in to hear how the hall sounded. After the Mothers were doing their weirdness for about 1 1/2 hours, you suddenly hear ex-Turtle Howard Kaylan yell “Fire!” and then make a reference to Arthur Brown who had had a hit of the same name.

Alas it was no joke as somebody had supposedly set off a flare gun (or maybe even just lit matches) which set the place on fire:

We know this level of detail because, miraculously, even though Zappa lost all his equipment in the fire, somehow the recording miraculously survived. You can hear all this starting at about 1:21 with Frank advising the crowd to “calmly head for the exits.”

From an account of the fire: “Announcements were made from stage as smoke appeared and the audience, which had been seated on the floor, began to make their way out. Many people were able to make their way out quickly but the fire then suddenly intensified and threatened to trap people who had been near the stage. Fire crews were on the scene quickly and broke large plate glass windows between the old Casino and the newer building next door.

It enabled people to jump out but also fanned the flames and the fire quickly took a proper hold, ultimately destroying the whole of the largely wooden interior, leaving just the walls. Two of the Deep Purple crew managed to break open the gear van and drive it to safety and apart from some minor injuries suffered when a boiler exploded everyone got out safely.”

The members of Deep Purple watched this conflagration from their hotel. “Funky Claude” was Claude Nobs, the director of the Montreux Jazz Festival. He later found the guys a place to record and I believe they dedicated Machine Head to him.

The band needed one more song and so when they found a theater called the Pavlion, they started working on a tune for which guitarist Ritchie Blackmore had come up with a riff. They put music to it and didn’t quite know how to finish it. And they made so much noise that the police fairly quickly came and kicked them out.

They wound up finishing the album in a near empty hotel. Stories vary as to whether someone had used the phrase “smoke on the water” as they were watching the flames or whether one of the band dreamed it. Regardless, that became the song.

We ended up at the Grand Hotel
It was empty, cold and bare
But with the Rolling truck Stones thing just outside
Making our music there
With a few red lights and a few old beds
We made a place to sweat

Not one of them thought at any point, “Wow, this will be a massive hit.” In fact, they had already picked the song “Never Before” for their next single.

And while – to these ears at least – “Lazy,” and “Highway Star” are much better instances of a band at its peak, “Smoke on the Water” just took off.

Wikipedia: [“Smoke on the Water”] was first released on their 1972 album Machine Head. In 2004, the song was ranked number 434 on Rolling Stone magazine’s list of the 500 greatest songs of all time,ranked number 4 in Total Guitar magazine’s Greatest Guitar Riffs Ever, and in March 2005, Q magazineplaced “Smoke on the Water” at number 12 in its list of the 100 greatest guitar tracks.

Years ago I visited my friend Steve in Philly. He happened to have a guitar around. I played the (incredibly simple) opening lick and his 12-year-old son’s eyes widened. I returned a year later and his son not only knew that lick but he had bought a couple guitars and was learning stuff off of records. He then started studying jazz and a few years later I could no longer keep up with him. Bastard.

The Montreux Casino was, of course, rebuilt. And since that song in a way helped put Montreux on he map, as a tribute the casino now has a monument to the song. And so yes, the power of rock and roll. 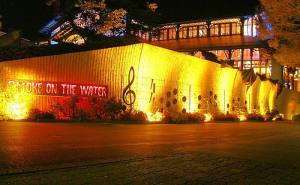 No matter what we get out of this
I know, I know we’ll never forget

*In addition to losing (in today’s dollars) about $300,00 worth of equipment, Zappa was almost killed when a week later at a London show (with rented equipment), some asshole shoved Frank off the stage, fucking him up badly enough that he spent a year in a wheelchair. Zappa died on December 4, 1993, exactly 22 years to the day from the fire.

27 thoughts on “Stories Behind the Songs – Smoke on the Water”