For the record, the first rock festival in history was the little-remembered Fantasy Fair and Magic Mountain Music Festival in Marin County, CA, June 10-11, 1967. Most of the acts came out of the San Francisco scene and represented bands that had played at Avalon and Bill Graham’s Fillmore West ballrooms.

This was followed less than a week later by the far more famous Monterey International Pop Music Festival, where Jimi Hendrix and Janis Joplin became overnight sensations. (And The Who didn’t do so badly either.) There were about a half-dozen more rock festivals between 1967 and 1969, one of which was (the first) May 1968 Miami Pop.

Thus began my series on Woodstock – or as I would have called it, Hippiefest – that ran back in 2016. Given that it’s the 50th anniversary it seemed like as good a time as any to re-introduce this five-part series. The links below should take you to each post. If they don’t work, just go to the site, type in Woodstock on the search bar and they’ll all come up. 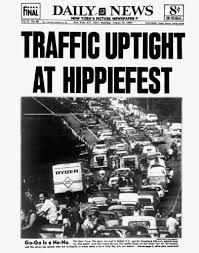 I should also note that American public TV on its American Masters series is running a pretty good documentary, more from the point of view of how the people who attended it felt rather than a focus on the bands as such. And the original movie (and maybe Director’s Cut) is playing in theaters if you’re so inclined. It will be far out, groovy and … beautiful, man.

As to the failure of the 50th-anniversary concert, well, I guess it just wasn’t meant to be. There *will* be a celebration at Bethel this weekend on what one site called “sacred grounds,” which, to me, seems kind of overblown, but ok.