“If I could find a white man who had the Negro sound and the Negro feel, I could make a billion dollars” – Sam Phillips, founder (Memphis, TN, February 1952) of Sun Records.

“In a blinding flash of sanctified light a human being, just a kid from the southern sticks split the world in two. Suddenly, a new world existed. The one below your belt. Sunday night in 1956, into the mind of a 7-year-old kid, the revolution had been televised.. We the unwashed, the invisible, the powerless the kids would want more. More love, life, sex, truth, power, soul. And most of all – more rock and roll.

I stared into a blue tube as fun happened. the joyful life-affirming, hip-shaking, guitar-playing, ass-quaking, mind-and heart-changing, race-challenging, soul-lifting bliss of a freer existence. The world had fucking changed. In an instant! All you needed to do to get a taste of it was to risk being your true self.

Because a rock and roll genie had been let out of the bottle. I listened and I heard a mighty call to action. The one thing he had that I didn’t have was the guitar. It was the sword in the stone. That fucking guitar was the key. It was the staff of righteousness.” – Bruce Springsteen on first seeing Elvis on TV

I intentionally started this four-part series on Elvis Presley with the Sam Phillips quote, not only because it’s a famous quote but because the issue of race and music is forever with us and no more so than back in the 1950s. So as an amateur historian of music, it seemed necessary to intertwine those stories because, well, they’re important and, frankly, inescapable.

Several years back I wrote a review of Elvis biographer Peter Gurlanick’s fine book, Sam Phillips, The Man Who Invented Rock ‘n Roll. I’d encourage you to first read that post but if you don’t, just a few quotes here from my post about Phillips and that era:

“What I had not understood – and this book fleshes out in some detail – was Phillips’ initial single-minded dedication and focus on recording music performed specifically by black Southern performers. He truly believed not only that this music should be heard, but that it should be enjoyed by both black and white and not segregated into “race records.”

Because at this time, in the fifties, America was a racially segregated country and nowhere more than in the South. Phillips, to his credit, not only was never a bigot but was a man who believed to his very soul that “I knew the physical separation of the races – but I knew the integration of their souls.” But he wanted the integration of their music. And as we’ve seen, he wanted to make real money. And as much as he loved Howlin’ Wolf’s music, that wasn’t happening.

And so, back to the beginning ….

Wikipedia: “Elvis Aaron Presley was born on January 8, 1935, in Tupelo, Mississippi, (115 mi. SE of Memphis) to Gladys Love Presley in the two-room “shotgun house*” built by his father, Vernon Elvis Presley, in preparation for the birth. 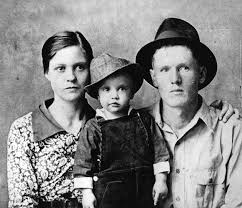 Jesse Garon Presley, his identical twin brother, was delivered 35 minutes before him, stillborn. Presley became close to both parents and formed an especially close bond with his mother. The family attended an Assembly of God church, where he found his initial musical inspiration. (Not at all unusual in the American South – ME.) 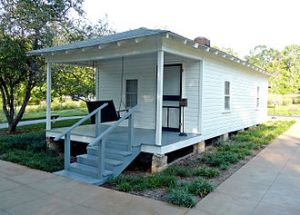 Elvis’ family were not well-off in any sense of the word and the shotgun shack was a long way from Graceland. In fact, there were times they went on public assistance in order to make ends meet.

In 1945, at age ten Elvis sang the lugubrious “Old Shep” for his first public performance, a singing contest at the Mississippi-Alabama Fair and Dairy Show. Dressed as a cowboy, he stood on a chair to reach the microphone. He came in fifth place, winning $5 and a free ticket to the fair rides.

In 1947, when he was 12, Presley began bringing his guitar to school on a daily basis. He played and sang during lunchtime, and was often teased as a “trashy” kid who played “hillbilly” music. (Per Ken Burn’s Country Music documentary, this was an early term for that genre of music.) By then, the family was living in a largely Black neighborhood.

Presley was a fan of country singer Mississippi Slim’s show on the Tupelo radio station WELO. (Now a “classic soul” station – ME) When his protégé was twelve years old, Slim scheduled him for two on-air performances. It’s notable that Elvis’ first performances were in 1947 before he ever heard of Sun Records or before, in fact, it ever existed.

In November 1948, the family moved to Memphis, Tennessee. In 1950, Elvis began practicing guitar in earnest, learning from an older neighbor named Lee Denson. Together they spent time playing with future rockabilly guys Dorsey and Johnny Burnette. (The Burnettes came up with the first rockabilly version of “Train Kept a Rollin'” that inspired the Yardbirds and later, Aerosmith.)

During his high school years, Presley started to develop his own individual style, growing his sideburns and styling his hair. As a young man, he’d “shop at Lansky Bros in Memphis – to which he was a loyal customer all his life – where he learned to pop up his collar and where he bought high-waisted pegged trousers, two-tone shoes or simple black loafers, short sleeve shirts, loose-fitting sack suits, skinny or bootlace ties.” (This is exactly how I dress -ME.)

He used to hang out on Beale Street, the heart of Memphis’ blues scene. He started singing and playing guitar in minstrel shows and started to realize what playing in front of people did for his popularity. “I wasn’t popular in school … I failed music—only thing I ever failed. And then they entered me in this talent show … when I came onstage I heard people kind of rumbling and whispering and so forth, ’cause nobody knew I even sang. It was amazing how popular I became after that.” (Guralnick’s books on Presley’s early years make it clear what an ordinary yet at the same time, eccentric guy he was.)

Elvis loved country (Hank Snow, Roy Acuff, Jimmie Rodgers), and he loved blues (B.B. King, Sister Rosetta Tharpe) and gospel, which he sang in church. B.B. recalled that he had known Presley before he was popular when they both used to frequent Beale Street. (Interesting brief interview here between B.B. and, alas, the now-disgraced Charlie Rose. But worth watching. And hang in for the shot of B.B’s guitar, Lucille, lying on the table – ME.)

By the time he graduated from high school in June 1953, Presley had already singled out music as his future. Two months later, In August 1953 – when he was 18 – Elvis went to Sun Records to make a two-sided acetate disc**: “My Happiness” – a standard tune Connie Francis would later have a hit with and “That’s When Your Heartaches Begin,” a song from the ’30s.

Per Wikipedia: “He later claimed that he intended the record as a gift for his mother, or that he was merely interested in what he ‘sounded like’ although there was a much cheaper, amateur record-making service at a nearby general store. Peter Guralnick argued that Elvis chose Sun in the hope of being discovered.”

When asked by Sun receptionist Marion Keisker who he sounded like, he answered, “I don’t sound like nobody.” After he recorded, Sam Phillips asked Keisker to note down the young man’s name, which she did along with her own commentary: “Good ballad singer. Hold.” They weren’t super impressed and were not to see him again for another year.

This acetate – still apparently in playable shape – was auctioned off in early 2019 for $300,000 to an anonymous buyer who was later revealed to be no other than Jack White. (Much better a guy who really appreciates it, IMHO, than some random collector – ME.) The acetate cost about 4 bucks to make.

From the auction site write-up: “When Elvis left the studio that day, he and his friend Ed Leek stopped at Ed’s parents’ house to listen to the fresh recording, as they had a modern phonograph and Elvis wanted to hear how it sounded.

Elvis left his friend’s house that day without the record and this acetate is being offered directly from a descendant of Ed Leek. The acetate has a label containing the titles of each song typed on the reverse of a Sun Record label.”

*A New Orleans architectural historian suggested that shotgun-style houses originated in the Creole suburbs of New Orleans in the early 1800’s. He also stated that the term “shotgun” is a reference to the idea that if all the doors are opened, a “shotgun blast fired into the house from the front doorway will fly cleanly to the other end and out at the back.”

**Acetate discs (or lacquers) were used in the early days of recording and were created using a cutting lathe. They don’t hold up under repeated play and were the antecedents of the more durable polyvinyl chloride-based LP’s.

NEXT: Elvis Pretzel? Or Pelvis Parsley?