“I am in truth the Steppenwolf that I often call myself; that beast astray that finds neither home nor joy nor nourishment in a world that is strange and incomprehensible to him.” – Hermann Hesse – Steppenwolf.

The above quote from Hesse’s 1927 novel Der Steppenwolf is not only the story of my life but also the inspiration for the Canadian band’s name.* The novel tells of a man who feels alienated from modern civilization and is going through an existential crisis. The band’s producer had just read the book and liked the title, so he proposed it as the name. John Kay hadn’t read the book yet, nor had the other band members. But no one had a better idea, so the name stuck

Wikipedia: Joachim Fritz Krauledat was born in Tilsit, East Prussia, German Reich, now Sovetsk, Kaliningrad Oblast, Russia. In early 1945, his mother fled with him from the advancing Soviet troops during the Evacuation of East Prussia in harsh winter conditions. They later fled to Hanover, West Germany, moved to Toronto in 1958 and to Buffalo, NY in 1963. (Buffalo is 28 miles (45 kilometers) from the Canadian border.) Somewhere along the way, Joachim found it easier to Anglicize his name, becoming John Kay.

Having heard rock ‘n roll on US Armed Forces radio in Germany, he fell in love with the raw, primal sound. Realizing he could sing and picking up guitar and harmonica, In 1965, he joined a moderately successful Canadian band called the Sparrows who had specialized – like so many others at that time – in British Invasion-style rock. With the addition of Kay and keyboardist Goldy McJohn, the band – like so many others at that time – started heading more into a bluesy, hard-rock sound.

The band morphed into Sparrow, started getting popular in New York, did a couple of singles -and then in late 1966 headed out to California. Their original guitar player – Dennis Edmonton – changed his name to Mars Bonfire because, well, the Sixties. (I wish my name was Mars Bonfire. Jim. How boring is that?  – ME). But he embarked on a solo career, never really joined Steppenwolf and later wrote one of their biggest hits. His brother Jerry became Steppenwolf’s drummer.

Now joined by LA natives Michael Monarch (guitar) and Rushton Moreve (bass), Steppenwolf opened for bands such as The Doors and started to establish a reputation as a hard-rockin’ band. Steppenwolf got themselves signed to ABC-Dunhill and in January 1968, released their eponymous debut album.

Their second single – the first was a cool tune called “Sookie, Sookie,” – was the (now) iconic “Born to Be Wild” written by Mars Bonfire. He explains,

“I was walking down Hollywood Boulevard one day and saw a poster in a window saying ‘Born to Ride’ with a picture of a motorcycle erupting out of the earth like a volcano with all this fire around it. Around this time I had just purchased my first car, a little secondhand Ford Falcon. So all this came together lyrically: the idea of the motorcycle coming out along with the freedom and joy I felt in having my first car and being able to drive myself around whenever I wanted.”

The song was released in June 1968 and became a hit. It was the first mention of the term “heavy metal” in a song. You may be tired of hearing this song but you fucking KNOW it kicks ass and you KNOW that no matter what you are doing – even if you are in the middle of fucking – you must stop and nail that drum break.

Another great tune from this album is “The Pusher,” written by country guy Hoyt Axton. A cousin (in my mind) to Lou Reed’s “Heroin,” its lazy feel and great lyrics capture the feel of that drug scene of the ’60s like no other. Both “Wild” and “The Pusher,” were used in 1969’s now hopelessly dated flick Easy Rider:** 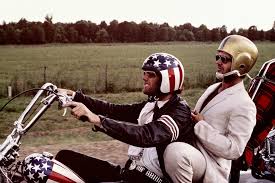 You know I’ve smoked a lot of grass
O’ Lord, I’ve popped a lot of pills
But I’ve never touched nothin’
That my spirit could kill

You know, I’ve seen a lot of people walkin’ ’round
With tombstones in their eyes
But the pusher don’t care
Ah, if you live or if you die

Steppenwolf was, by now, hot. (I recall seeing Kay on a Hugh Hefner TV show called Playboy After Dark. It aspired to a Playboy Mansion-style party whose sole purpose – near as I can tell – was to remind me that there was no way I was getting near any of those hot women.)

Steppenwolf actually released two (count ’em) albums in 1968, the second one being the imaginatively titled, The Second. The breakthrough song from this album was the “psychedelic” “Magic Carpet Ride,” a song I liked, frankly, for about a week then got bored with. But. It was a hit and you can hear it pretty much hear it any day of the week on Classic Rock radio.

Steppenwolf went through the usual band musical chair bullshit. And then some. I quote the following without comment:

“Former Sparrow bandmate Nick St. Nicholas -who had replaced Moreve as bassist – was let go in mid-1970. He had supposedly appeared in nothing but rabbit ears and a jockstrap at the Fillmore East in April 1970 – a poorly documented tale hotly denied by St. Nicholas*** – and his habit of wearing muumuus and kaftans on stage began to wear on Kay, whose penchant for leather vests and pants was more in line with the image he wanted for the band.”

In 1969, the band released an album with a single called “Rock Me,” also used in the soundtrack to the “dirty movie,” Candy. Candy was based on a novel by Terry Southern who had written the screenplay for Easy Rider. This sex farce managed to squeeze Marlon Brando AND Ringo Starr AND Richard Burton in it and its screenplay was by Buck Henry who just recently passed away. Ah, the Sixties. A reviewer on Rotten Tomatoes refers to the flick as “A solid four stars worth of magnificent disaster.”

But I really like “Rock Me.” It’s got a great groove and I dig that percussion thingy that comes along a couple minutes in.

Although they continued to release albums through the mid-70s, I don’t recall Steppenwolf having any more hits or even having much of an impact past the ’60s. The band broke up in 72-73 and various incarnations (John Kay and Steppenwolf, New Steppenwolf) came and went with different players.

A glance at Steppenwolf’s webpage seems to indicate that some incarnation of the band last toured in 2011. John Kay appears to be still touring but with kind of schedule you would expect a 76-year-old guy to maintain.

Wikipedia: Steppenwolf sold over 25 million records worldwide, released eight gold albums and 12 Billboard Hot 100 singles, of which six were top 40 hits, including three top 10 successes: “Born to Be Wild,” “Magic Carpet Ride,” and “Rock Me.” They were nominated to the Rock and Roll Hall of Fame in 2017 but were not inducted. Too bad. Totally fucking belong in there if you ask me.

*As the band was named after the novel Der Steppenwolf by German author Hermann Hesse, who was born in the Black Forest town of Calw, the city invited them to come over and play in the International Hermann-Hesse-Festival 2002, along with other bands inspired by Hesse. (It’s unclear how “inspired” they were but hey, a gig is a gig. Apparently some minds were blown when Kay spoke fluent German.)

**Easy Rider put Dennis Hopper, Peter Fonda, and Jack Nicholson on the map. Along with Bonnie and Clyde and The Graduate, Easy Rider helped kick-start the New Hollywood era during the late 1960s and 1970s. Hopper and Fonda had mixed success after this film. But Nicholson was nominated for Best Actor in a Supporting Role. This was his breakout moment, his before and after. It forever not only freed him from the dungeon of low-budget Roger Corman films but also led to his astonishing run of great (Five Easy Pieces, Carnal Knowledge, The Last Detail, Chinatown, Cuckoo’s Nest) movies.