Apologies to those who read my first post, may want to have commented but could not. I wrote that from my phone before it dawned on me I could use the hotel’s business PCs. And the mobile version – for reasons known only to WordPress – defaulted to no comments. Since fixed.

Days One and Two (Thursday and Friday) of Rock and Roll Fantasy Camp are for orientation, jamming and rehearsing. The shuttle picked us up at the hotel and drove us back and forth. Where they were bringing us each day was to a studio in Burbank, CA called Nightingale Studios. This is an out-of-the-way, small recording studio that the camp rents for the weekend. (They’ve been doing this camp for about 25 years.)

The first morning was exhilarating. You get there and all the staff is there to welcome you, hand out all-access badges and get you oriented. The guy who does much of the orientation is a guy named David Fishof whose baby this camp is. You can read Fishof’s entire (impressive) rock producer/sports agent history here if you so choose.

I’ll just quote a clip that you may find interesting: “Fishof then created and produced ‘Ringo Starr & His All-Starr Band.’ From 1989 to 2003, he produced eight different ‘Ringo Starr and His All-Starr Band’ tours. During those years Fishof also created the British Rock Symphony, which featured Roger Daltrey of The Who, Alice Cooper, and Jon Anderson of the band Yes.”

I talked to Fishof and he s a super-nice, down-to-earth guy. And he knows ALL the rock stars and is able to bring them here because he treats them well and gets the ones who are not arrogant but who like to share their experiences – both musical and life – with others.

There were maybe 50 -60 campers who had been divided up into bands prior to our arrival. (Not sure what criteria this was based on exactly but we had to send a clip of our playing.) There were also “groupies” in attendance, people who had paid a lesser fee to be there. Typically these were wives or husbands who attended rehearsals, masterclasses, dinners, and the gigs. I mentioned this to my wife and it didn’t really interest her. (And for the record, no my newly-found Pillsbury Dough Boy look did not attract any new ones.)

The band consisted of folks from all over – Trish Ladd, singer and Yes lover from San Diego; Seth Simon, ace guitarist from LA; Barry Britzman, top-hatted bassist from Moorpark, CA; Alan Lorden, Berklee-trained keyboardist from Raleigh, NC; Forbes Duthie, rock-solid drummer all the way from Scotland; Michael Boonie, solid rhythm (and some lead) guitarist from my hometown of Philly. (Boonie – as he is called – and I kept running into people at the hotel and camp from Philly.) Each band had a counselor, a professional musician whose job it was to whip the band into shape and get them ready to perform on Saturday and Sunday.

I think we got lucky both in terms of the quality of the band personnel as well as counselor.* Ours was a guy named Gregg Potter who is the drummer in the Buddy Rich Band. This band is kept alive by none other than Cathy Rich, Buddy’s daughter. And –  I shit you not – she is Gregg’s wife and our co-counselor. And I fell madly in love with both of them and that NEVER happens. They are great people and clearly in love. I can summarize my feelings for Cathy by saying she could murder me and while dying I would say with my last breath, “Cathy you are a goddess. Thank you so much for killing me.”

They sang backup vocals on everything and even joined us on stage. These two are involved in a big-time jazz band but love rock and roll every bit as much as we do. I started playing “Born to Be Wild” for fun and Cathy and Gregg jumped on it. (Cathy’s story of taking her father to see Zep is priceless. Let’s say he wasn’t necessarily a fan.)

Day One didn’t start till 1 pm when we were shuttled over to the studio. Very exciting on the shuttle as it was filled with musicians who were – first and foremost – music lovers like all of you guys. A few people on my bus had done this before and filled us in. (Some of the people I met are junkies for these things and are return visitors. One guy had recently been to a camp with guitarist Steve Vai. Another guy took the prog-rock “Cruise to the Edge” voyage so often I think he’s lost count. Is that healthy? Well, the guy’s a shrink so if he says it is, it must be!)

The studio has an outside area that was used to hand out all-access passes, grab some food and just generally hang out when you needed a break from rehearsing. Much of that first afternoon was taken up by orientation provided by Mr. Fishof. He also introduced all of the counselors who were also masterclass leaders.

We finally got into our room (pictured at top of post) and started to get to know each other, checked out the amps, etc. In the first post, I listed the songs we could choose from. Interestingly, based on the emails we traded pre-camp, I think I was by far the biggest Stones fan, everyone seemingly preferring Yes or Deep Purple. Seth, one of the other guitarists had been in a Deep Purple tribute band and was our ringer in that area.

Without going into great detail, suffice it to say that deciding on which songs to play “live” was a tough journey. Some people in the band would be happy playing anything; some wanted to do specific tunes they liked. (I was closer to the latter camp but willing to compromise. As the counselors reminded us, being in a band is a team sport. I’m pretty sure nobody paid to hear me go wonka-wonka-wonka through a bunch of solos I know.)

This band was on point from moment one. Everybody had a fairly proficient level of playing, one guy had been Berklee-trained; almost all had been in bands at some point. Seth – our Deep Purple ace-in-the-hole –  knew all those tunes. So that first day we blew through four Deep Purple, one Yes, one Stones tune.

Now, if you don’t play an instrument, the “difficulty hierarchy” for playing these bands’ songs is something like this – Stones, relatively easy; Deep Purple, moderately challenging, Yes, fucking impossible. Just about every camper would tell you that Yes caused them to sweat. The players in that band were (and are) virtuosic and their arrangements are complex. I think the counselors could have pulled off a perfect “Roundabout” in two days but not so much the rest of us.

So what was it like putting these songs together? Well, I haven’t been in a band in over thirty years and there were some things to get used to. For one, standing up and playing. I sit down all the time to play so my back hurt till I got used to. Plus I kept stepping on my guitar cord and yanking it out.

Also, I am a big one for good communications. Well, when you’re in a room with half-a-dozen people all noodling on their instruments, half the time you can’t hear some decision that’s made 10 feet away. I found that incredibly frustrating. But I always reminded myself that this is just a fun weekend and we’re not practicing to play in Madison Square Garden.

Prior to the rehearsals, we had discussed which songs we wanted to do. I had said I did not want to do “Smoke on the Water” as I was deathly sick of it. Guess which was one of the two songs we did “live?” We also worked up a killer version of “Highway Star” with me and Seth playing dual lead. I could just picture Steve Morse joining us for that. Alas, also did not make the cut.

Other songs were deemed more fun and it turns out that you have to take the audience into consideration as well. (Who knew??) But it was all good. A band is a team and we do what’s best for the band, not the individual. A wise man once said that the needs of the many outweigh the needs of the few. Or the one.

In between all this, we attended master classes which consisted of counselors giving us musical (and life) lessons. I think the most memorable one for me was with guitarist Craig Goldy. He’s a big bear of a man but a sweetheart of a guy. In addition to musical stuff, he told us his life story which consisted of living out of his car till he was rescued by Ronnie James Dio who took him under his wing. Goldy’s a very inspirational guy and he signed my program “Dare to Dream.” Indeed. 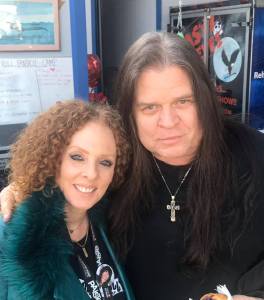 I should note here that in addition to our band we had three “groupies,” lovely ladies (wives of three of the guys) who hung out in our rehearsal room and applauded and boogied no matter how many times they heard “Smoke.” I’m sorry I don’t have a picture of them.

This being California, I had temporarily put aside the single-digit temperatures of New England for the balmy climes of Cali. I say this because the studio has an outside area where we’d congregate, eat, etc. So that night we chowed down and discussed the day’s experiences.

After that, in the evening, the counselors hosted jams in some of the rooms. I did not join in as our band decided we needed some rehearsal. We weren’t 100% sure what songs we were gonna do but we knew we needed some work. I don’t care if you’re doing “Johnny B. Goode,” rehearsal will only make you tighter as a band and we needed that.

If memory serves, by the end of the day we had played Deep Purple’s “Burn,” “Space Truckin,” “Smoke on the Water,” “Highway Star,” Yes’  “Owner of a Lonely Heart,” (Yes’ easiest song), and the Stones’ “Gimme Shelter.”

Also by the end of the day, between jet lag and the last remnants of a cold, I was fucking exhausted. So you wanna be a rock and roll star? “Just get an electric guitar. Then take some time and learn how to play.” But remember – it’s a long way to the top if you wanna rock and roll.

I will have video but not yet. To get you in the mood I will leave you with Deep Purple’s “Burn.”

*Other counselors were bassist Rudy Sarzo (Ozzy, Quiet Riot, Whitesnake); keyboardist Steve Ferlazzo (Avril Lavigne, Richie Sambora); bassist Tony Franklin (The Firm, David Gilmour, Kate Bush); drummer Matt Starr (Ace Frehley, members of Guns ‘n Roses, Bon Jovi and pretty much everybody under the sun.) Special thanks to guitarist/singer Jason Ebs. Jason is a counselor who did not attend this session but with whom I had a pre-session Skype lesson.

14 thoughts on “Burn! Rock Camp Rehearsal – Days One and Two”