“By the time the 1970s had begun, bands like ELP were a little up their own arses. Everything was too serious and too overblown. So we set out with Thick as a Brick to show up this side of the genre.” – Ian Anderson

Really don’t mind if you sit this one out
My word’s but a whisper, your deafness a shout
I may make you feel but I can’t make you think
Your sperm’s in the gutter, your love’s in the sink

When Jethro Tull first started -= back in Blackpool, Lancashire in 1967 – they were essentially (like so many others) a blues-rock outfit. But they loudly (if in a subtle way) announced their departure from that genre by calling their debut album This Was. Founder Ian Anderson later admitted that blues elements and black American folk culture were “not part of my life and I couldn’t keep doing that – I’d look like a complete twit.” (Fortunately, this didn’t stop all the other Brits who pursued blues with a vengeance.)

It’s always been really hard to pin Tull down to just one genre. In fact, Wikipedia lists their genres as “progressive rock, hard rock, blues rock, folk-rock, jazz fusion. (Were it me, I’d add in whatever you call that uniquely British, vaguely medieval-sounding thing that bands like Steeleye Span and Fairport Convention had going on.)

What made me think of Tull recently was that – for whatever reason – I’ve been somewhat in a prog state of mind lately. I picked up a couple of issues of Prog Magazine (yes there is such a thing) and found out that – lo and behold – Tull are now considered a prog-rock band. (Well, sort of. Ian Anderson says they had their “prog years” and let us not forget that they famously (or infamously) once beat Metallica out for a Grammy for best hard rock album. (1987’s Crest of a Knave.)

Anyway! No matter what genre they are, I have always dug Tull. Now I cannot say that I have followed them all that much recently and like a lot of people, feel their heyday was back in the ’70s. Starting in 1968, they had a string of really good albums (This Was, Stand Up, Benefit, Aqualung) that led to 1972’s Thick as a Brick.*

And how did this concept album come about? Well, by actually being a send-up of the then-current prog (King Crimson, Moody Blues, Yes, Genesis, Emerson Lake & Palmer) bands of the day. Ian Anderson sets you straight and it starts with Aqualung (my friend):

“However much I insisted that Aqualung wasn’t a concept album, the media still persisted in treating it as such. They seemed to believe the whole record was a major religious story. The truth was that three or four songs were linked by questioning the nature of religion… I thought, Ok, we’ll not only now do a real concept album, but we’re going to make it the mother of all concept albums.” (Apparently, he had never heard of Tommy. Oh wait, that’s a rock opera. This is a concept album. Difference?)

Wikipedia: “The original packaging, designed like a (12-page!) newspaper, claims the album to be a musical adaptation of an epic poem by fictional eight-year-old genius Gerald Bostock, though the lyrics were actually written by the band’s frontman, Ian Anderson. (Tull’s manager said that Jethro Tull is Ian Anderson and Ian Anderson is Jethro Tull. I think the other guys – particularly in these days – were as much contributors as sidemen. But the vision (and songwriting) in Tull has always been Anderson.)

The album itself is just shy of 44 minutes long. It is effectively one long suite but in the original vinyl was divided into Sides One and Two. Interestingly for me, Side One works better as a coherent suite of songs. (Which is what it is). It’s somewhat akin in that sense to Tubular Bells in that Side Two is good but Side One is the draw.

Anderson was fortunate in that he had one of the best incarnations of Tull in this band’s long existence. In addition to Anderson on flute and acoustic guitar, the musicians were Martin Barre, electric guitar; John Evan, piano, organ, harpsichord; Jeffrey Hammond, bass guitar; Barriemore Barlow, drums. 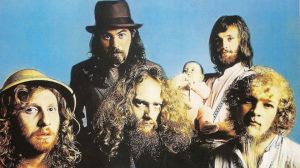 Anderson: “There are so many weird time changes and musical innovations on the album. I would never compare what we did back then to jazz rockers like Weather Report or Mahavishnu Orchestra but we were a little more sophisticated than the usual riff rockers.”

So why do I love this album? Because it all just works! It is by turns melodic, rocking, odd, driving – the band is totally 100% in synch. Everybody sounds on top of their game. I loved this album when it came it and I love it to this day. Do you know I listened to this album four times this week? I never do that. I cannot get or its lyrics out of my head:

Coming on the heels of Aqualung, the album was a worldwide smash reaching Number One on the Billboard charts. (Consider the possibility of anything like this getting on any kind of popular chart today assuming it would even get recorded.) Tull decided to tour behind it and, well, let’s say it was an interesting experience:

“At the start of the show, men wearing capes appeared onstage and began sweeping the floor, counting the audience and studying the venue; after a few minutes, some of them revealed themselves to be members of the band and began to play. During some shows, the entire band stopped mid-performance when a telephone rang on stage, which Anderson would answer, before carrying on performing. News and weather reports were read halfway through the show, and a man in a scuba diver outfit came onstage.”

The Japanese did not get the humor and alas, my fellow Americans were not kind to Tull, yelling out for Aqualung and other tunes they really preferred to hear. In fact, my fellow citizens really outdid themselves on this one (arseholes):

Anderson: “It was in America where I met my match. [They wanted to hear] the band responsible for “Locomotive Breath” and “Aqualung” … so waltzing into town with Thick as a Brick = even though it was Number One – well, people were shouting us down with hoots and whistles. … At the end of the American tour, I nearly hung my hat up. I said to our manager Terry Ellis, ‘That’s it, I’m done!’ I don’t want to do this anymore and I’m never coming back. It took me quite a while to recover from it.”

Reviews were mixed at the time of release but over time this album has gained the reputation it has always deserved in the opinion of your humble reporter. In 2014, Prog magazine listed Thick as a Brick at number 5 in the list “The 100 Greatest Prog Albums of All Time,” voted for by its readers.

Rolling Stone listed the album at number 7 in their Top 50 Prog Albums of All Time. Thick as a Brick is ranked number 3 in the user-managed website Prog Archives’s top albums list, with an average rank of 4.64 stars. Rush’s Geddy Lee has said Thick as a Brick is one of his favorite albums as did Iron Maiden’s Steve Harris. And no less a personage than the ubiquitous Steven Wilson has remastered it.

So what are you waiting for? Put on some headphones and spend the next 45 or so minutes finding out what a great album sounds like when all the right elements come together. And try to get those melodies out of your head.

*Anderson produced a follow-up to the album in 2012, focusing on the adult life of the fictional Gerald Bostock. (Thick as a Brick 2). I will have to give it a spin some day.

The downloadable version of the 40th-anniversary edition splits the overall suite into eight separate parts:

26 thoughts on “Featured Album – Thick as a Brick – Jethro Tull”