The reasons for the Beatles’ breakup were myriad, not the least of which is this – How does the most successful, most scrutinized rock band of all time stay together? Or for matter, how did they manage to stay together so long? (Lennon and McCartney met on July 6, 1957. Do the math. That’s almost 13 years.)

Contrary to a certain amount of popular belief, Yoko Ono did not break up the Beatles. She was part of the mix but John Lennon had expressed interest in leaving the band as far back as when he was making the movie How I Won the War in 1966. {“The English army had just won the war.”)

Lennon: “Of course I was a Beatle, but things had begun to change. In 1966, just before we met, I went to Almeria, Spain, to make the movie How I Won the War. It did me a lot of good to get away. I was there six weeks. I wrote “Strawberry Fields Forever” there, by the way. It gave me time to think on my own, away from the others.

From then on, I was looking for somewhere to go, but I didn’t have the nerve to really step out on the boat by myself and push it off. But when I fell in love with Yoko, I knew, My God, this is different from anything I’ve ever known. This is something other. This is more than a hit record, more than gold, more than everything. It is indescribable.”

Wikipedia: “Their breakup was a cumulative process attributed to numerous factors, such as the strain of the Beatlemania phenomenon, the death of manager Brian Epstein in 1967, McCartney’s domineering role, Lennon’s heroin use, his relationship with Yoko Ono, Harrison’s prolific songwriting output, the floundering of Apple Corps* and the Get Back project (later Let It Be, 1970), and managerial disputes.”

I agree with all of that and my own take it on it is that an early indicator was the death of Brian Epstein in August of 1967. He had been their north star and the Beatles were just lost without him. Collectively – at least at that time – they probably had as much business sense as grade school kid. All the contractual and tax stuff had been done for them. And even though he hadn’t been in the studio for much of the Beatles career, it was he and producer George Martin who would mastermind the next releases of albums and singles.

None of this is to say that the Beatles didn’t have great output from that point on. (They’d quit touring in 1966.) But there were missteps such as the incredibly pointless Magical Mystery Tour film which bombed so badly on British TV that American TV refused to air it. (I chuckle to think that the word ‘Plot’ appears in the Wikipedia description of this film.) It was subsequently screened at the Fillmore East and didn’t make its way to American theaters till 1974. 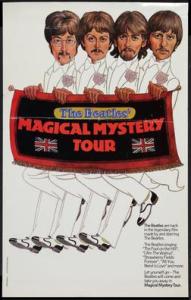 But they did manage to put out four albums before the band ceased to exist: The White Album, a glorious mess that was really four individual guys doing their thing even including the pictures; Yellow Submarine, a so-so soundtrack with a fun animated film; Abbey Road**, which brought back their trademark cohesiveness (“Can we make an album like we used to, Mr. Martin?” “I will if you’ll let me.”) and the long-delayed Let it Be, another pretty good, if not great, mish-mash of stuff.

The recording of Let it Be was – in many ways – the last straw. Stuck filming and recording the thing in remote and cold Twickenham Studios, only McCartney seemed able to muster any enthusiasm for it. There was a fun clip from the film where a worn-down Harrison says to McCartney, “I’ll play whatever you want me to play.” But it’s been pulled by the Beatles Mafia so just imagine it.

Once John Lennon and the other guys got Allen Klein involved, the business headaches began to be exacerbated. Paul brought in his own manager, his wife Linda’s father, Lee. This did not go down well at all. McCartney’s song “You Never Give Me Your Money” from Abbey Road was as much about this nightmarish situation as anything:

You never give me your money,
You only give me your funny paper,
And in the middle of negotiations, you break down.

And so, the Fab Four had pretty much had enough. And while John had privately announced his intention to leave, this was the (sort of) official announcement:

Rolling Stone: “The world finally got the message on April 10th, 1970. That was the day Paul McCartney made headlines with a Q&A he sent out with press copies of his solo album McCartney, in which he casually announced a “break with the Beatles.” Why? “Personal differences, business differences, musical differences, but most of all because I have a better time with my family.” Temporary or permanent? “I don’t know.” Was he planning to make any more music with the band? “No.”

Paul had said things like this before, in public and in private — all four of them had. But this time, nobody made a move to deny it. When their new movie Let It Be premiered in London on May 20th, none of them showed up. The four Beatles never got together to watch the movie or listen to the album. The four Beatles never set foot in the same room again.”

And then of course, recriminations were tossed back and forth, mostly between Paul and John. I won’t go into every petty little detail but suffice it to say that

John and Paul did eventually reconcile. In fact of April of 1976, they were watching Saturday Night Live in John’s apartment at the Dakota when – as part of a skit – they were offered money (some say $3000) to just come on the show. Per a brief moment, they thought about it but then said nah, fuck it. A shame. That would have been a moment.

I couldn’t think of a particular song or album to share so spend some time enjoying the Abbey Road webcam. It’s not quite as active as it usually is due to coronavirus. But I can tell you that there are worse ways to spend a day then watching people pause on the crossway.

*The Apple corps fiasco was so fucked-up it requires its own post. Hell, there are books written about it.