“I was a fixer, a builder, an inventor, ever since I can remember.” – Tom Scholz

If you’ve ever read this blog, you’ll know that the Music Enthusiast is not a fan of what he snobbishly calls “empty arena rock.” And sometimes Boston is that. But when they’re on, they’re smokin’.

Tom Scholz, a native of Ohio, came to Boston in the late 60s and get a bachelor’s and masters’ degree in mechanical engineering from MIT. He wound up working for Polaroid as a senior product design engineer. He not only played classical piano as a kid he was also one of those “take-the-radio-apart-to-see-how-it-works” guys.*

Scholz started writing music while in school and joined a band called Freehold where he first hooked up with guitarist Barry Goudreau and drummer Jim Masdea. They later got together with singer Brad Delp in 1970. Scholz used his Polaroid salary to build a recording studio in his basement. It was great,” he recalls of Polaroid, “I couldn’t believe all of this free time I suddenly had. My work day actually ended at 5:00 PM!”

From his website: “Bitten by the Rock and Roll bug from hearing the likes of The Animals, The Kinks and The Yardbirds on the radio, Tom had begun teaching himself guitar, bass, and organ. Ironically, Tom never picked up a guitar until he was 21, but when he did, he was self-taught, was a very quick study, and mastered his craft by listening to his idols, Jeff Beck, Joe Walsh, Jimmy Page, and Ray Davies.

Todd Rundgren was the first musician that Tom heard that utilized lead guitars in harmony, and was the spark that compelled Scholz to create his trademark harmony guitar solos.” (The Music Enthusiast applauds his choices.)

At first, working with just a home-made 4-track recorder and mixer, he gradually taught himself audio engineering and music production. Risking his savings from Polaroid, (courageously agreed to by his wife Cindy), he upgraded to a spartan 12-track studio capable of commercial production quality.”

The band made endless demo tapes and sent them to record companies who equally endlessly rejected them. By 1974, the band – such as it was by then – recorded demos of what later became some of their most popular songs. Scholz played all the instruments on the demos, except for the drums.

The demos eventually got the notice of CBS-owned Epic Records. I find this story of how Scholz tricked the label very revealing of the er, high level of intelligence of some record execs. (No offense, Rich K.)

“In November 1975, the group performed for the executives in a Boston warehouse that doubled as Aerosmith’s practice facility. Epic wanted the band to record in Los Angeles with a record producer, but Scholz was unwilling and wanted to record the album in his basement studio, so he hired John Boylan to run interference with the label. In an elaborate ruse, Scholz tricked the label into thinking the band was recording on the West Coast when in reality, the bulk was being tracked solely by Scholz at his Massachusetts home.”

The album was released in August of 1976 and is not only the most successful basement demo of all time, but it also became one of the largest-selling debut albums of all time.

From that fancy basement debut album recorded in Watertown, MA, here is “Smokin'”

You couldn’t walk six and a half feet in 1976 without hearing a tune from this album. “Hitch a Ride” has such a great outro solo it was proclaimed as the best by none other than musician Rick Beato who does a lot of great, great stuff on his YouTube channel.

Beato leans more towards this kind of guitar playing than I do and so I would have gone with one of two others on his list, “Free Bird” or “Hotel California.” Still, some great melodic playing by Scholz.

Boston really did help to create a highly produced, almost symphonic kind of meticulous rock sound. (I say “help” to create as Queen had been doing stuff like this already.) I’m sure that when the British punks heard this in their “Year Zero” they hated it. But the rest of the world -unencumbered by the socio-political shit England was going through – dug it. I’ll do two more tunes then you can listen to the whole album on Spotify if you choose.

Well, we were just another band out of Boston
On the road to try to make ends meet
Playin’ all the bars, sleepin’ in our cars
And we practiced right on out in the street

No, we didn’t have much money
We barely made enough to survive
But when we got up on stage and got ready to play
People came alive.

Lastly, what can be said about “More Than A Feeling,” one of (I think) the greatest rock and roll songs of all time? How can you not sing along with that great anthemic chorus? Rolling Stone once did a list of great summer songs. They didn’t include this tune because it wasn’t really about summer. But what else does it feel like? One of the editors said it sounded like “the sound of his brother washing his car in the yard.”

Wikipedia: Boston has been described as a pivot in the transition of mainstream American rock from blues-based proto-metal to power pop, “combining some of the ebullience of the rock era’s early days with the precision and technology that would mark rock record productions from then on.”

Boston’s success ushered in the next wave of “producer” rock sound. Following the album’s success, its sound became imitated by several other prominent rock bands of the era. The record created a reference point for production values and studio technology that would stand for years.

The album is hailed as one of the greatest in rock history, with inclusion in the book 1001 Albums You Must Hear Before You Die. The album was also ranked No. 43 on the Rock and Roll Hall of Fame’s “Definitive 200” list

This tune was listed as Number 500 on Rolling Stone’s list of greatest songs, then dropped. They’re also not in the Rock and Roll Hall of Fame. I attribute both of those things to Jann Wenner being a dickhead.

*Until about the mid-’90s, Scholz had a company that made electronic gear such as headphones and a popular sound device called the Rockman. 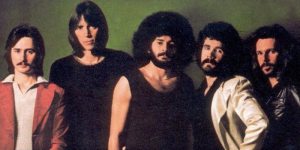