Cigarettes and smack (heroin) are the two truly addictive habits I’ve known. You might add women,” he said. “My obsession centers on women—did then (when young) and does now. I can’t leave them alone.” – Ray Charles

Once again Ray was on the move. One of his musician buddies had a girlfriend on the West Coast so they moved out to Seattle, Washington in early 1948. Seattle was also a port town and it was also jumpin’. (You got sailors, you got action.) Fifteen-year-old Quincy Jones had just moved there from Chicago. He got to know eighteen-year-old Ray and this led to a lifelong personal and professional relationship. (What are the odds, right?)

Ray formed a band with that friend, guitarist Gossie McKee and bassist Milton Garrett. (No drums, interestingly. They called themselves the McSon Trio.) 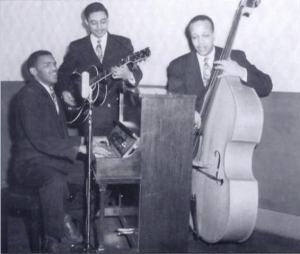 In 1949, the band recorded Ray’s “Confession Blues” which became his first national hit, hitting number 2 on the Billboard chart. But that was as part of a band and no one at that point had heard of Ray Charles. Ray moved one more time – this time permanently – to Los Angeles. He spent the next few years touring as musical director with bluesman Lowell Fulson.

Two things to mention here – one is that this was music made by black musicians for a black audience. There may have been a few white hipsters who dug it but largely the music scene – like America itself – was segregated. And Ray and his band’s stories of abuse while traveling in the Deep South are all too familiar.

“When you grow up in the southern states of America where anyone colored is treated like dirt,” said Ray, “you either grow to accept it or become determined to find something better – even if it kills you.”

Of course an occupational hazard of musicians the world over – besides the hazards of travel -is substance abuse. The guys in the community were getting high but no one wanted the responsibility of having to care for the blind guy. But they soon got over that and Ray enjoyed his pot and then shortly thereafter, heroin. Which led to a seventeen-year addiction.

Ray had a girlfriend from back home named Louise who got pregnant. They had a nice love story for a while but Ray eventually had to put her on a bus back home. During this time Ray met a guy from Down Beat (no relation to the jazz magazine) records. The guy sent him a recording contract and a one-way ticket to Los Angeles. Ray had found his home and never looked back.

Ray had always wanted a big band and while an eight-piece ensemble wasn’t – strictly speaking – a big band it was a move in the right direction. During the day Ray recorded and arranged and in his off time, he played. “Women found Ray intensely attractive, and blindness proved no handicap in bed. He often carried out two, three, or more affairs at once and still responded to the willing ladies whom he met as a traveling entertainer.” (Turns out that sex with groupies was not invented by rock stars.)

If you read about Ray’s life, the next years all throughout the Fifties are a blur of life on the road. Ray was a traveling musician in every sense of the word – buses, Cadillacs, nice house in LA with a wife, girlfriends on the road. And an ever-persistent heroin habit. He definitely missed some shows but it’s amazing to see how well he functioned given his habit.

The band kept getting bigger in pursuit of the elusive big band sound Ray had in his head. Jazz great to-be Stanley Turrentine joined them for a while at only 16 years old. (How do these guys get away with this? I was in high school at that age.)

Here’s a cut with Turrentine blowing in the background called “Kissa Me Baby.” How is it no one ever says that Ray was early rock and roll?

More songs were released (but not yet that big hit)  and by the early Fifties, Ray – though not yet famous – had an LA recording contract and New York representation. So things were starting to happen.

Ray and the gang made their way to New York City where they inevitably played the Apollo Theater. Now, as good as Ray’s music was, it wasn’t burning up the charts. And so his label, Swingtime, made it clear his contract was up for grabs.

Which was fortuitous as the by now five-year-old Atlantic records was looking to make an impact. Co-founder Ahmet Ertegun had previously said, “I want a piano player like that on our label.” And so in 1952 for the princely sum of $2500 (about $25,000 in today’s dollars), Ray Charles became an Atlantic recording artist. This moment is, to say the least, pivotal.

The story of Atlantic Records is incredibly important and likely deserves its own post. But let us just say that what Turks Ahmet and Neshui Ertegun, Herb Abramson, Jerry Wexler, and engineer Tom Dowd put together is one of the greatest labels in recording history.

You know what? Let’s keep this post brief and save that story for the next post. I’ll leave you here with the tune, “Baby Let Me Hold Your Hand,” that made Ahmet say he wanted a piano player like that on his label. (Ironically the guitar is featured here more than the piano.)