Rolling Stone: Leslie West, the towering guitarist who created the hard-rock milestone “Mississippi Queen” with his band Mountain, died Wednesday morning. West’s brother, Larry West Weinstein, confirmed the musician’s death to Rolling Stone. He was 75. The cause of death was cardiac arrest. On Monday, West was rushed to a hospital after suffering cardiac arrest at his home near Daytona, Florida, where he never regained consciousness.

Leslie Weinstein was born in New York City in 1945 and changed his last name to West after his parents’ divorce.  His first band was called the Vagrants, described as an “R&B/blue-eyed soul-rock band influenced by the likes of the Rascals that was one of the few teenage garage rock acts to come out of the New York metropolitan area. (Below is from a Q and A with West for Best Classic Bands website):

The Vagrants were the house band at a joint on Long Island called the Action House. Do you remember it?
Leslie West: “That was the only place that we could work regularly! I remember Billy Joel* was with the Hassles, and there was a group called the Illusion, another called the Rich Kids. There weren’t that many groups.”

True, but they all had the same blue-eyed soul style, including your band.
“They were all trying to be like the Rascals, with the Hammond B-3 organ. That’s what we were trying to do. In those days, there weren’t that many places to play. When people say, “I remember the good old days,” if you really think back, maybe there were one or two days that were really great and the rest of them were like shit. How many days were really great? I was just learning how to play then—we were making rules up as we went along.”

The Vagrants had a couple of minor hits including a pretty good pre-Aretha cover of Otis Redding’s “Respect.” But why listen to that when we can enjoy a video clip of them playing a tune called “Oh Those Eyes.” A couple of fledgling directors were making a Beach Party movie called – wait for it – Disk-O-Tek Holiday. Which, frankly, seems kinda groovy!

Check out Leslie stepping down for a decent 14-second solo at about 1:25.

Some of the Vagrants’ recordings were produced by bassist Felix Pappalardi, who would eventually produce most of Cream’s albums. The Vagrants eventually played themselves out and Leslie decided to go solo. He and Pappalardi got on well. But when he heard West’s tunes he liked them but decided they’d sound better if he played bass on them.

And so in July 1969, West released an album called Mountain. Now strictly speaking, this was a West solo album and not the band Mountain’s debut album. It was named that because West was a very big guy who always struggled with his weight. The album has some level of Cream feel minus the psychedelia and certainly minus the international fame. It’s not a bad album but didn’t really make a splash.

This tune is called “Blood of the Sun.” It introduced the world to his great, crunchy guitar and larynx-shredding vocals:

You were one of the first guitarists to play what was called “heavy” guitar at the time. How did you develop that sound?
“I started listening to Eric Clapton and Jimi Hendrix and I said, “Whoa, I never heard anybody play the guitar like this.” A friend of mine, Waddy Wachtel,** lived in the same building, in Forest Hills [Queens, New York].

He taught me how to play real guitar. I lived on one side of the building and he lived on the other. It was in Forest Hills Plaza, a brand-new high-rise. I’d hear a Beatles song come on the radio and I’d go down the elevator and run and take the elevator up to his house and by the time I got to his house, he already knew the song and he would teach it to me. He bought himself a George Harrison model Rickenbacker 12-string and he sold me his Les Paul Jr. That’s how I started playing that. He was the reason—we went to see the Beatles together and had some great times together.”

West met Jimi Hendrix in a recording studio. They shared an agent and it’s West’s belief that that’s how this almost completely unknown band got on the bill at Woodstock, literally one month after an album almost nobody had heard. You’d never know they were there as they never made the original album or movie. Their gig was sandwiched between Canned Heat and the Dead and no they didn’t do “Mississippi Queen” as it didn’t even exist yet.

One of the tunes they did do was “Stormy Monday” and it is a hell of a lot crunchier than the Allman’s later version. What a tone and vibrato Leslie had! (Tone is everything to guitar players.) According to Rolling Stone, “a drum beat from a live recording of the song, played by N.D. Smart, has been sampled by numerous rap acts, including De La Soul, the Game, ASAP Rocky, and, most notably, Kanye West in “The Glory” and Jay-Z in “99 Problems.”

How did “Mississippi Queen” come about? You’d probably never seen the Mississippi River!
“[Drummer] Corky Laing had this lyric and he came to my apartment in Manhattan. He says, “Look, I have this lyric, ‘Mississippi Queen.’” He said when he was in Nantucket and playing this bar and the power went out, he was just playing the drums and shouting the words “Mississippi Queen, do you know what I mean?” He’s watching this girl dance—this is what he says.

So, I started fooling around with the guitar in the apartment and I came up with this riff and it’s three chords. We went really quickly into the studio and Felix told him to count it off and he counted it off with a cowbell. We left it in there. The only thing I don’t like is there’s a piano in there. I hated it. It was stupid for it to be in there. Needless to say, we don’t use a piano when we play it now.”

Here’s Leslie and Peter Frampton doing “Queen” live from a couple years ago:

The reason he’s sitting down there is because he had part of his right leg amputated due to diabetes. Like so many other rockers he’d also had his share of drug problems, even confessing to turning Ozzy Osbourne on to cocaine.

Although West kept on playing and releasing solo albums, his popularity was never quite the same as it had been in the early ’70s. Apart from his solo career and occasional Mountain reformations, his most notable other band was West, Bruce and Laing. Bruce of course being Jack Bruce and Laing being his Mountain drummer Corky Laing.

“The Doctor” is a hot rocker from their debut album Why Doncha:

Leslie West recorded some thirty albums either solo, with Mountain or with West, Bruce and Laing plus God knows how many guest shots.

I’ll leave you here with one of my favorites, an outtake from Who’s Next. It’s the great Motown tune (also covered by the Band) “Baby Don’t You Do It.” Leslie played on it at Townshend’s  request:

*Billy’s tweet is singularly unemotional for a guy he knows and who played on his River of Dreams album. “Paying respects to virtuoso guitarist, Leslie West, who passed away this week. — Billy Joel.” Here they are being inducted into the Long Island Music Hall of Fame. 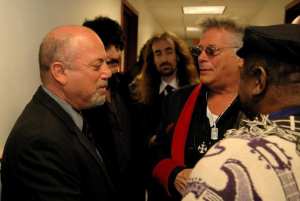 **Wachtel, of course, has gone on to play with everybody from Jackson Browne to Melissa Etheridge to James Taylor.

17 thoughts on “An ME Tribute to Leslie West”