“Charlie Watts has always been the bed that I lie on musically.” – Keith Richards.

Rolling Stones drummer Charlie Watts died at the age of 80 on August 24, 2021, five days ago as I write this. Lest ye think that somehow the Music Enthusiast missed this momentous occasion, you would be wrong. ME has been otherwise engaged and then off for a few days of sun ‘n fun minus laptop, hence unable to post.

Now I don’t comment on the passing of every single rocker in every single band. But the Rolling Stones aren’t just any other band. And so, I would feel remiss on not saying something, hopefully, something of value…

Wikipedia: Charles Robert Watts was born in Bloomsbury, London, to Charles Richard Watts, a lorry driver for the London, Midland, and Scottish Railway, and wife Lillian Charlotte who had been a factory worker.

Watts’s neighbor Dave Green was a childhood friend, and they remained friends until Watts’s death. Green became a jazz bassist and recalls that as boys, “we discovered 78rpm records. Charlie had more records than I did … We used to go to Charlie’s bedroom and just get these records out.

Watts’s earliest records were jazz recordings. He remembered owning 78 RPM records of Jelly Roll Morton and Charlie Parker. Green recalls that Watts also “had the one with Monk and the Johnny Dodge Trio. Charlie was ahead of me in listening and acquisitions.”

Charlie later said that he “bought a banjo, and didn’t like the dots on the neck. So I took the neck off, and at the same time I heard a drummer called Chico Hamilton, who played with Gerry Mulligan, and I wanted to play like that, with brushes. I didn’t have a snare drum, so I put the banjo head on a stand.”

In the late 50’s he played drums in local jazz bands, eventually meeting Alexis Korner who asked him to join Blues Incorporated. This was incredibly fortuitous because as I wrote about a while back, for a whole Korners’ band was THE center of R&B in London. (Charlie, like just about every other London rocker had gone to art school for graphic design and was later instrumental in designing some of their stage layouts.)

In mid-1962, Watts first met Brian Jones, Ian “Stu” Stewart, Mick Jagger, and Keith Richards, who also frequented the London clubs. They couldn’t afford to pay him at first and so he didn’t join what would become the Rolling Stones until early 1963. His first public appearance as a permanent member was at the Ealing Jazz Club on 2 February 1963. By this time Bill Wyman had joined the band and the Rolling Stones were (and still, remarkably are) a thing.

I’ve read a lot – I mean a TON – about the Stones over the years. And if there is one constant in what Keith Richards has always said it’s his effusive, consistent praise for Charlie’s drumming. The interesting thing about their sound is that Charlie followed Keith’s playing rather than the reverse. So Charlie was always behind the beat which gave the band a certain swing, a certain feel that was hard to duplicate.

Here’s Keef from a couple of years ago talking about how Charlie influenced his playing.

And here’s one of my very favorite drummers, Stewart Copeland, talking about Charlie’s technique:

Married for fifty years to the same woman, Charlie was the low-key guy, the straight man to the Glimmer Twins’ bad boy antics. Remarkably, he stayed faithful to his wife all that time on the road, even at the Playboy mansion!

But like everybody who comes into the Stones orbit, he eventually had his problems with drugs and alcohol, coming out of it in the mid-’80s. My favorite Charlie Story from that period is this one:

In the mid-1980s, an intoxicated Mick Jagger phoned Watts’s hotel room in the middle of the night, asking, “Where’s my drummer?” Watts reportedly got up, shaved, dressed in a suit, put on a tie and freshly shined shoes, descended the stairs, and punched Jagger in the face, saying: “Never call me your drummer again. You’re my singer.”

I’ll point out a couple of numbers where I think Charlie’s drumming is especially sharp. Here’s “Paint it Black”

And “Can’t You Hear Me Knockin'”, another great tune where Charlie is in that pocket and drives it as the song shifts beat:

And lastly, here is the other side of Charlie Watts doing Duke Ellington’s “Night Train.”

Charlie Watts is number 12 on Rolling Stone’s list of greatest drummers. One listen to any of the seemingly endless number of Stones songs will tell you why. There was no way they would have ever become The World’s Greatest Rock and Roll band without him. “Charlie put the roll in rock and roll,” Keith said. And who am I to argue?

Finally, here is a tribute video the band put together: 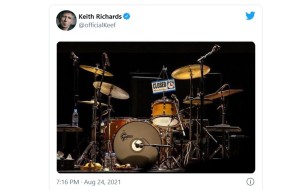 17 thoughts on “An ME Tribute to Charlie Watts”