Time for some new stuff. This may be the mellowest list I’ve had for a while. I’m digging everything here. Hope you do too…

From his bio: “Declan O’Rourke has been crafting songs from his mid-teens, his attention snagged from the age of 13 when he was given a guitar by a priest whilst visiting Kyabram, north-central Victoria, Australia. By the time he was 24, he had returned to Ireland, landing in the middle of – and settling comfortably into – a fiercely creative music scene in Dublin that was the fertile breeding ground for the likes of Glen Hansard/The Frames, Paddy Casey, Gemma Hayes, Damien Rice, Lisa Hannigan, and many more.

“My goal is to take something that has already moved me,” says O’Rourke, “and paint it into some kind of poetic vehicle that will carry it to others, with the correct instructions inside for them to unpack it and get the same result. Over time, I have found that being an artist is a process of stripping away layers of yourself in order to get to the core, to get to something that is pure and honest.”

“The Harbour” is a beautiful song and pretty uncharacteristic of what you’re used to hearing in these parts. Great singer. The violin will get to you:

I don’t believe that either Taj Mahal (the official blues artist of the Commonwealth of Massachusett) or Ry Cooder (the guitarist who has played with everybody) need any introduction. They are bluesy, rootsy Americana guys who first played together in 1965 (!) in a band called Rising Sons. 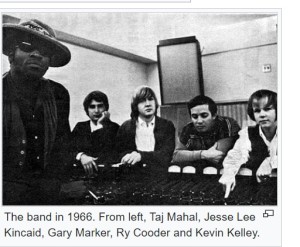 Here they are doing a low-down back-porch tune called “Hooray Hooray.” The yet-to-be-released album is called Get on Board: The Songs of Sonny Terry and Brownie McGhee. If you’re unfamiliar with Sonny and Terry, they were a very successful (for blues) duo for a good forty years or so starting in 1942.

I did a review of a tune by Walter Longscott a while back. I mentioned that he is a “Belgian musician who has been playing music for more than 30 years, mostly in various cover bands.” (I like cover bands – ME).

However, his press kit says: ” but it’s only until two years ago that he decided to write and record his own songs. Walter’s extraordinary adventure that started with the first album Writing On The Wall now continues with the release of the second album The Story Of A Lonesome Man.  Again Walter collaborated with many musicians from all over the world to transform his songs, originally written on an acoustic guitar, into something truly distinctive.

I asked him what song he wanted to go with and he said if I wanted some of that Knopfler sound, go with “Shine On.” It’s a tasty piece with some eloquent guitar:

Russ Hewitt tells us that he started playing guitar at age 11 because his brother started playing. He started taking it seriously at age 14 once his brother quit and sold Russ his good equipment, He later graduated from the University of North Texas with a Classical guitar performance degree and played in Rock and Heavy Metal bands in the 90s/00s.

Magically, he won the Z Rock guitar contest in both acoustic and electric categories. (An impressive feat – ME). He tells us he was playing Spanish/Latin/Flamenco in restaurants and once the last rock band broke up, he moved to his style full time.

On this tune he teams up with ace guitarist Nuno Bettencourt, Nuno was originally from Portugal and later moved to Massachusetts. You may well know Nuno’s name from (at least) the band Extreme which was a very big band in the 80s, back in the good old days of music in Boston. Nuno’s had a solid solo career, reformed Extreme at one point, and has played with just about everybody.

This tune is called “Chasing Horizons.” I love this stuff: “When I was listening back to the song,” Russ advises,” I kept thinking of Nuno and how he would lock in with his band on the funk grooves. I felt this song would be rhythmically and harmonically interesting enough for Nuno to play on, so I reached out.”

“Jem Bosatta grew up among the hills and hymns of southern England, making the switch to Berlin in 2018 and establishing himself as ‘one to watch’ on the budding folk scene there. His songs recall both modern indie-folk heavyweights such as Phoebe Bridgers and Sufjan Stevens, and old heroes Leonard Cohen, and Joni Mitchell.” (That is quite the list – ME).

“His surprise first release, “Killer” could be a lullaby-like acoustic-café indie-folk number, if it weren’t so chilling. “Killer” tells of the artist’s reaction to a misogynistic incel’s mass shooting. Slowly, the song spins out a connection between the unhinged deeds of a radicalized loner and the learnt misogyny of the everyday.

In the run-up to releasing his EP LOSS & LOVE, he will spend two months traveling the length of Italy, from Etna to the Alps, thanks to a musical research grant from rights collection society GVL. There he will discover the country of his lost heritage, a pilgrimage and a foraging trip to bring new musical life into bloom.”

This tune, to me, has a Paul Simon-like melancholy and lyrics. And it’s a great way to end this piece.