I had thought of just doing a two-part series on Big Mac. But Rumours is too impactful an album not to get a post of its own. So here we go.

“As Fleetwood Mac inched its way to the summit of the charts, our lives were snarled by disharmony and pain. In the year it took us to make our second album with the new lineup, the record that would change all our lives forever, we all got divorced. The whole band.

Chris and John’s seven-year marriage was already over by then. Stevie and Lindsey’s relationship, four years old, dissolved when Stevie walked out. And Jenny (Boyd)* and I … well, the story follows shortly.” Mick Fleetwood from his autobiography.

I’ll save you the sordid details but suffice it to say that the Divine Ms. Boyd felt well and truly neglected by Mr. Fleetwood what with him effectively managing the band touring, rehearsing, etc. So she took the kids and headed back to the UK.

Wikipedia: “The pressure on Fleetwood Mac to release a successful follow-up album, combined with their new-found wealth, led to creative and personal tensions which were allegedly fueled by high consumption of drugs and alcohol.” (Heh. Dear Wikipedia. Musicians will use any fucking excuse to get high, good times or bad – ME.)

According to Mick, breaking up the band was not an option. This despite the fact that they had all fucked up their marriages and the people in the band had mostly all been in relationships with each other. They started recording the new album (working title Yesterday’s Gone) in early 1976 at the Record Plant n the nice little town of Sausalito, just north of San Francisco.

As to the recording process, one of the producers, Richard Dashut, had these insightful comments: “All I can say is that it was trial-by-ordeal, and the craziest period of our lives. We went four or five weeks without sleep (!), doing a lot of drugs. (Ah, the Seventies – ME.) I’m talking about cocaine in such quantities that at one point I thought was really going insane. The whole atmosphere was really tense, with arguments all the time and people storming in and out.

The workdays would drag on for eighteen to twenty hours, and eventually, the amount of cocaine began to do damage. … And yet – I turn on the radio today and they’re still playing that album. Our attitude is if that’s what it took so be it.”

The mix of musicians was interesting and not just because it was a rare British/American band. Buckingham knew more about making a good pop record while the Brits came from more of an improvisational blues background. But they were hardly newcomers. This was Mac’s eleventh studio album.

As to who exactly was running the show, well, according to Mick, “no one.” However control freak Lindsey always had strong opinions about how things should sound. So Mick, still very much the leader of the band, sat him down and said “You’re either in a band or you’re not.” I think Lindsey realized he had a better thing within the band than without so they resolved that as amicably as they could.

By that point in time, Fleetwood Mac had gone platinum and Mick had a good feeling about this new one. He figured it could sell eight or nine million. He was off just a bit as the album has now sold north of 40 million copies.

When the band listened to the recordings, they were “aghast at how awful they sounded.” They found another room to mix it in, overdubbed some stuff, and breathed new life into it. Meanwhile, the band went on tour and played with the likes of Jeff Beck and the Eagles. When they looked out at the crowd, every venue had girls dressed in Stevie’s stage costume of black chiffon dresses, top hats and, I suppose, heels. (Famously, Stevie is barely 5’1 inches or 155 centimeters.)

Finally, in February of 1977, the new album (now called Rumours due to all the ones floating around about the band) shipped. Fleetwood Mac was still selling, their back catalog was selling, the tour had been successful and the band was hot. So hot that they wound up on the cover of the Rolling Stone. 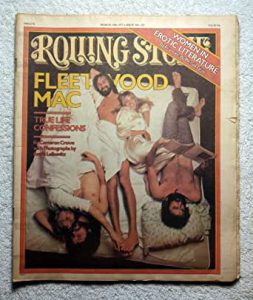 By the end of March ’77, the album had gone platinum (one million copies sold). One month. You couldn’t escape it. But it was a well-crafted pop-rock album with excellent songs.

Stevie Nicks wrote “Dreams” in early 1976 at the Record Plant. “One day when I wasn’t required in the main studio I took a Fender Rhodes and went into another studio that was said to belong to Sly Stone. It was a black-and-red room, with a sunken pit in the middle where there was a piano, and a big black-velvet bed with Victorian drapes.” She wrote it in about ten minutes. The band wasn’t initially crazy about her demo but Lindsey worked his magic on it.

Buckingham “fashioned three sections out of identical chords, making each section sound completely different. He created the impression that there’s a thread running through the whole thing.”

I always had a special fondness for “The Chain.” It is one of the few songs credited to the entire band and started out life as a McVie/Fleetwood jam. Songfacts says the lyrics are Stevie’s about Lindsey. (Can they find no other topic than each other? It could have been a good album!!!!- ME)

Listen to the wind blow
Down comes the night
Run in the shadows
Damn your love, damn your lies
Break the silence
Damn the dark, damn the light

Not one to be outdone, Lindsey’s got one about Stevie! “Go Your Own Way.”

You can listen to the rest on Spotify if you’re now in the mood. Suffice it to say that Mac was now one of the biggest bands in the world. As we head to part three, I’ll leave you with this tantalizing tidbit from Mick’s book – “It was on [the Rumours] tour that some of the accumulated effects of the romance and passion that accrues to life on the road caught up with me. It was in Australia that I fell for Stevie Nicks.”

In 2003, Rumours was inducted into the Grammy Hall of Fame. In 2018, it was selected for preservation in the National Recording Registry, being deemed “culturally, historically, or artistically significant” by the Library of Congress. In 2020, Rumours was rated the seventh-greatest album of all time in Rolling Stone’s list of the “500 Greatest Albums of All Time”.

In 1998, Legacy: A Tribute to Fleetwood Mac’s Rumours was produced by Fleetwood and released. The record contained each song of the original Rumours covered by a different act influenced by it. Among the musicians involved were Tonic, Matchbox 20, and Goo Goo Dolls, Celtic rock groups The Corrs and The Cranberries, and Elton John, Duncan Sheik, and Jewel.

*Jenny is, of course, the sister of Pattie Boyd, the greatest muse in rock history.