Wherein I cram the last forty-five years of Mac into one post. By being populated with nothing but Nicks/Buckingham tunes, Spotify’s “This is Fleetwood Mac” is effectively null and void. It should be called “A Fleetwood Mac list compiled by idiots who don’t know shit.” My list is, while hardly comprehensive, more representative.

After Rumours, Buckingham “convinced Fleetwood to let his work on their next album be more experimental, and to be allowed to work on tracks at home before bringing them to the rest of the band in the studio.” I don’t know how well known this is but Peter Green played (uncredited) on a song on this album called “Brown Eyes.” It’s a pretty nice tune.

Tusk was a 20-track double album that was released in 1979. It sold 4 million copies which for most bands would be pretty significant. But compared to Rumours’ 40 million, well. let’s just say the record label was not happy and blamed Buckingham.

Producer Ken Caillat commented on Buckingham’s obsessive nature in the studio: “He was a maniac. On the first day, I set the studio up as usual. Then he said, ‘Turn every knob 180 degrees from where it is now and see what happens.’ He’d tape microphones to the studio floor and get into a sort of push-up position to sing. Early on, he came in and he’d freaked out in the shower and cut off all his hair with nail scissors. He was stressed.”

In addition to his perfectionism, like a lot of what we now call classic rock bands, Buckingham was afraid that after the punks Mac would be seen as a dinosaur. To a certain demographic he was probably right.

I now realize in looking at Tusk’s track listing that I never picked up on this album and besides “Brown Eyes” there are exactly two songs I know from it – “Tusk” and “Sara.” Both are good tunes and “Sara” is one of Nick’s best. At the request of Mick Fleetwood, the band recruited the University of Southern California’s Trojan Marching Band to play on the single. Stevie had been a cheerleader in high school, hence the twirling.

Stevie released a pretty well-received solo album in 1981 called Bella Donna and Buckingham did some solo stuff as well. Big Mac released their thirteenth studio album, Mirage, in 1982. Suitably chastised by the “failure” of Tusk, this was more of a return to the breezy soft-rock of Rumours and Fleetwood Mac. “Hold Me” and “Gypsy” were hits from it.

The band took a much-needed break after Mirage and several of them released solo albums, all of which did well. However, during this period, Big Mac filed for bankruptcy, Nick was admitted to the Betty Ford Clinic and John McVie suffered an addiction-related seizure. These people were in their mid-30s but the party, I think, was well and truly over. Nicks was misdiagnosed at one point by some quack and spent years in a fog taking the wrong medication.

In 1987, Mac’s fourteenth (and last with this lineup) album Tango in the Night was released. This is an album that started out life as a Buckingham sole venture. As to the production of this album, again it wasn’t the happiest of affairs. Nicks wasn’t particularly motivated. “I can remember going up there and not being happy to even be there… I didn’t go very often.” Nicks recorded her parts for Buckingham and McVie’s songs intoxicated; Buckingham deleted most of Nicks’ vocals after she left the studio.

One of my favorite Mac songs is “Big Love” with some insanely great guitar playing from Lindsay:

I think it’s fair to say that while Big Mac still had a passionate following, Buckingham’s fears were somewhat realized. Tango sold three million copies even though it did spawn a few hits. They toured, sold out those tours but ten years later were no longer kings of the rock world.

The band had a tour scheduled in 1987 when (again) Buckingham became difficult. Feeling his creativity was being stifled, they met at Christine McVie’s house. It did not go well and Buckingham left the band. They hastily added guitarists Billy Burnette (nephew of rockabilly pioneer Johnny Burnette) and Rick Vito (Bob Seger, Bonnie Raitt, etc.). (I guess you could argue this is Mark IV but really, the last great creative output was the Buckingham/Nicks era. These guys were essentially just hired hands.)

Between 1990 and 2003, Mac released three albums. I took a look at the track listing and I do not recognize a single tune. At this point in time, whatever you may think of them, Mac had become pretty much a nostalgia band. But then, so are the Stones whose live set consists mostly of stuff from forty years ago. Milk that cow. In 1991 Nicks and Rick Vito left Fleetwood Mac altogether.

Get this – The Buckingham/Nicks/McVie/McVie/Fleetwood line-up reunited in 1993 at the request of US President Bill Clinton for his first Inaugural Ball. Clinton had made Fleetwood Mac’s “Don’t Stop” his campaign theme song. His request for it to be performed at the Inauguration Ball was met with enthusiasm by the band, although this line-up had “no intention of reuniting again.”

People came and went within the band and believe it or not, Dave Mason was part of the band for a minute as was Bekka Bramlett, Delaney and Bonnie’s daughter.

Despite the failure of their studio albums, in 1997 the band released a live album called The Dance with perhaps the stupidest, phoniest cover I’ve ever seen. 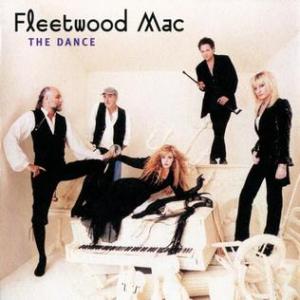 The Dance returned Fleetwood Mac to a superstar status they had not enjoyed since Tango in the Night. They toured behind it and this would be the last lineup of Classic Mac until 2013.

I thought this Wikipedia entry deserved to be quoted in its entirety. “In 1998 Fleetwood Mac were inducted into the Rock and Roll Hall of Fame. Members inducted included the original band, Mick Fleetwood, John McVie, Peter Green, Jeremy Spencer, and Danny Kirwan, and Rumours-era members Christine McVie, Stevie Nicks, and Lindsey Buckingham. Bob Welch was not included, despite his key role in keeping the band alive during the early 1970s.

The Rumours-era version of the band performed both at the induction ceremony and at the Grammy Awards program that year. Peter Green attended the induction ceremony but did not perform with his former bandmates, opting instead to perform his composition “Black Magic Woman” with Santana, who were inducted the same night. (He couldn’t play with both? – ME). Neither Jeremy Spencer nor Danny Kirwan attended.”

In 2014, Mick Fleetwood confirmed that Christine McVie would be rejoining Fleetwood Mac. In January 2015, Buckingham suggested that the new album and tour might be Fleetwood Mac’s last and that the band would cease operations in 2015 or soon afterward. He concluded: “We’re going to continue working on the new album and the solo stuff will take a back seat for a year or two. A beautiful way to wrap up this last act.”

But Fleetwood stated that the new album might take a few years to complete and that they were waiting for contributions from Nicks, who had been ambivalent about committing to a new record. I remember seeing a Mac biography on the tube a few years back. The band wanted to make another album. Stevie seemed to be the only one who was thinking straight.

“Is it possible that Fleetwood Mac might do another record? I can never tell you yes or no because I don’t know. I honestly don’t know… It’s like, do you want to take a chance of going in and setting up in a room for like a year [to record an album] and having a bunch of arguing people? And then not wanting to go on tour because you just spent a year arguing?”. She also emphasized that people do not buy as many records as they used to.

In 2018, Buckingham was fired. Supposedly it was because he wanted to do a solo thing and the band wanted to tour. And that may have been part of it. But the story eventually came out that at some awards show Lindsey had smirked during Nicks’ acceptance speech.

Interestingly, Lindsey thought the Nicks was quitting the band. But he found out from their manager that – quote- “Either you go or she’s gonna go.” And considering that everybody knows and loves Stevie and half the people who go see them can’t tell Buckingham from Adam, the choice was pretty clear.

Stevie had been long-time friends with Tom Petty and often wished she were in that band. So after Petty’s death she tapped Mike Campbell to join the band. Mick and Neil Finn of Crowded House go way back and so he was invited into the band as well. And that, kids, is – until further notice- today’s unit.

Rumours again entered the Billboard top 10 in 2020. The album received 30.6 million streams on streaming platforms the week of 15 October. Largely thanks to this dude

I can’t quite figure out if Mac is touring or planning to tour. Everybody seems in good health and are “only” in their 70s. However, it’s interesting to note that if you go onto TicketBastard there are no fewer than nine tribute bands.

Stevie Nicks sold a majority of her catalog for $100M dollars (94,835,000.00 EUR). Wonder if she ever imagined that back when she was cleaning houses and waitressing.

Let’s go full circle on this, shall we? One of the greatest Mac tunes is Peter Green’s song “Oh, Well.” Any rock/blues guitarist worth his or her salt must be able to play this tune. Here’s Mac doing it live with Lindsey.