I actually bought these tickets for a 2020 show and I think we all know what happened then. So finally, we waited long enough that we could actually congregate again. The wait was worth it.

The show was at the TD Garden in Boston where we (my son and I) saw The Who a few months ago. At that show, the setup was pretty traditional with the band at one end of the arena and us about 20 or so rows back.

But our seats here – while located on the floor – initially gave us what was a weird view. Here’s how it looked about 1/2 hour before showtime. 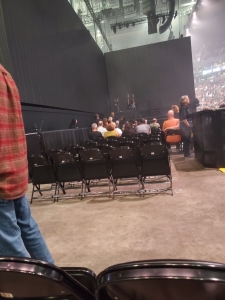 So you see this big black structure with people sitting right up against it. Was it going to rise? Was the band going to burst out of it? Well, given what we know about Floyd I should have guessed- it was a screen. AND it rose.

Initially they used the screen to give a countdown to the show and then a warning of sorts was written on it (and spoken in a sonorous British voice) thusly:

If you don’t like Roger’s politics, feel free to fuck off to the bar.

Now if you know anything about Waters’ politics at all, he’s very anti-fascist, very political, very pro-human rights, and famously, very pro-Palestine. I know people who won’t go see him for the latter reason. I will say that while I agree with most of his politics, I would hate to spend good money and find out that the artist was going to, say, applaud Trump all night.

Anyway, the show started with images on the screen (the visuals were incredible) and Waters standing in silhouette singing “Comfortably Numb” which segued into “The Happiest Days of Our Lives” and then “Another Brick in the Wall Parts 2 and 3.”

I am of the opinion that Waters said fuck it, I am going to get the big ones out of the way so I can do my own stuff. The concert consisted largely of cuts from Dark Side of the Moon, The Wall, and some Waters solo stuff (with one new tune called “The Bar.” (If you want earlier stuff, Nick Mason has a band called Saucerful of Secrets that does that stuff.)

Interestingly, even though Waters has a band that can apparently play just about anything, the iconic solos in “Numb” were not played. Here’s the show opening:

If there’s one thing Floyd have always known how to do it’s set a mood. This show did that fabulously. You feel you went on a journey. Waters used some of the printed words on the screen to tell the story of how he and Syd Barrett had seen the Stones way back when and decided then and there to form a band. Cut to random shots of the band. But it all worked.

Next up were some Waters solo tunes, “The Powers That Be,” (under images of police brutality and names of those killed by police), “The Bravery of Being Out of Range,” and “The Bar.”

Of this tune, one reviewer said, “Sitting down behind the piano, he introduced a new song, ‘The Bar,’ saying it was about a place where people who “care about human rights and free press and democracy … can go with a sense of community.” The ballad may be the most hopeful and warm thing he’s ever written.”

I should note that while we had seats on the floor that were pretty close, we were kinda sitting on the side with members of the band periodically visiting different sides. Half the time I wasn’t sure if Waters was even on stage as I couldn’t always see him (often played piano) and we spent a lot of time looking at the screen which was endlessly fascinating.

Next up were “Have a Cigar,” “Wish You Were Here,” “Shine On You Crazy Diamond (Parts VI-IX).” All great and the audience singing wasn’t intrusive or overbearing.

I’m really glad Waters did “Sheep” (from Animals.) A great, unique tune in so many ways. He introduced that album as being his Orwell album. BTW, Waters isn’t the singer that Gilmour is but he was perfectly fine and the guitar player sang a few.

That was the end of the first set. Somewhere in there, I forget where, the flying pig came rumbling out.

A word here about Waters politics – if you’re thinking of going and you don’t subscribe to his largely left-wing views, best save your money. He pulls no punches. There are many images of people whose rights have been stripped, he put pictures of Reagan and Trump on the screen and stamped them as War Criminals and with Biden said, “Just getting started.”

The screen rolled off a series of “Fuck this” and “Fuck that” messages and showed previously classified leaked atrocities. He also praised Julian Assange for his courage. (A reader informs me that rape charges against Assange, which may have been trumped up, have been dropped.)

The second half of this epic kicked off with “In the Flesh” and “Run Like Hell” from The Wall then a couple of Roger tunes and then ‘Money.” We laughed about this one later when we ran into some friends of my son at the merch table. Want a This is Not a Drill jacket? Two hundred dollars.

After “Money” it was mostly all Dark Side, then a tune I didn’t know from The Final Cut called “Two Suns in the Sunset.” Then this utterly cool thing happened:

At some point it became encore time and Roger came out by himself and sat at the piano. And an unusual thing happened that I’ve rarely seen at a show.

And Waters was visibly moved, almost to tears. A guy shouted out “We Love You Roger!” and at that moment, we did. Politics aside, Waters is a 78-year-old man who – like Springsteen in his Broadway show – sees, I think, his mortality closer than before. And is finally humble enough to appreciate the affection.

He also profusely thanked this Boston audience for “getting it.” Now, Boston is notoriously liberal and so the message might have resonated better. But I wouldn’t assume that the entire audience was aligned and that a good percentage weren’t buying his message and were just digging the music.

That said, afterward my son and I grabbed a beer at a bar across the street from the Garden. A guy there asked me what I thought and I told him it was awesome. He told me he was ex-military but that Waters’ show really made him think about what’s really going on in the world and about The Powers that Be.

Proving once again that best art does and should make us think and sometimes change minds. If you want party music, I suppose you can fuck off to the bar and listen to Motley Crue whose message can best be reduced to “Where are the hot chicks?”

At that point, the crew brought out some yellow caution tape, and while the band was playing the final number, one by one they marched off the stage. (The pig by now had run its course).

All in all, a magnificent, moving show by a great performer and his band. And as I said, worth the two-year wait for all involved. The place was crowded but didn’t appear to be sold out. Covid concerns? Understandable. Waters’ politics? Well, there’s always country music.

The Happiest Days of Our Lives

Another Brick in the Wall, Part 2

Another Brick in the Wall, Part 3

The Powers That Be

The Bravery of Being Out of Range

Wish You Were Here

Is This the Life We Really Want?

Two Suns in the Sunset