The inspiration for this post came from my picking up a copy of Uncut magazine featuring Elvis Costello. Uncut’s Ultimate Music Guide does these great tributes to musical artists where they’ll intersperse magazine articles (NME in this case) from the artist’s early days with contemporary reviews of their albums. Always excellent. 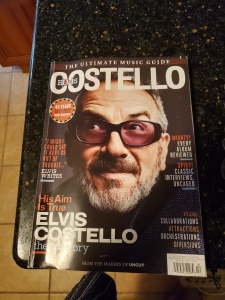 As a result, I decided to listen to EC’s catalog all the way through. (I’m up to 1980’s Get Happy!!) While I know some of his catalog incredibly well, some of it is just unknown to me. I tend not to stay with any artist over the long haul – not even Springsteen – instead tending to dip in and out of their catalog periodically That said, I did review Elvis’s most recent album not too long ago and went to see him a few years back.

I then started thinking well, what are the greatest debut albums of all time? Or at least, what is my opinion of that since there is no objective answer. So I’m starting here but my full list is at the end of the post. Feel free to argue with me or add your own list. The casual observer will see that my list covers the years 1963 to 2001, leans heavily toward classic rock and punk, and has one female (Chrissie Hynde) and no Black performers. Mea culpa but it is what it is.

Anyway, I gave his debut album My Aim is True a spin in the way I prefer – driving around in the car. When I did it, I did not realize that July 22, 1977, was the day it was released. So, forty-five years ago. Wow! (I jumped the gun by a day but you know, fuck it).

And boy does this album ever hold up. Inspired as Costello once told British critic Nick Kent by “revenge and guilt,” it hits hard with “Welcome to the Working Week” (all 1:22 of it) and never lets up:

This album and the next four were produced by Nick Lowe who had himself only recently managed to stumble his way into a gig as a producer. The sound is great and raw as hell for the punk era.

But it was pretty obvious from the beginning that Elvis Costello (born Declan McManus) was smarter and more clever than the average punk. By his own admission, he was heavily influenced by The Beatles, still owning to this day acetates of early Beatles singles (he’s also a Liverpudlian) that his father Ross, a big band singer, brought home.

Costello kept his day job as a data entry clerk at Elizabeth Arden during the sessions. He recorded the album with Huey Lewis’ band Clover (Huey wasn’t there as he had taken some vacation) as they were in town and Elvis had no band. Most of the tracks were recorded live and in first takes with little overdubbing. (See, this is the beauty of it. Just plug in and go- ME).

Here’s “Blame It On Cain.” Again, gotta quote the lyrics:

Blame it on Cain
Don’t blame it on me
Oh, oh, oh it’s nobody’s fault
But we need somebody to burn

Allmusic said: “Still, there’s no mistaking this for anything other than a punk record, and it’s a terrific one at that since even if he buries his singer/songwriter inclinations, they shine through as brightly as his cheerfully mean humor and immense musical skill; he sounds as comfortable with a ’50s knockoff like “No Dancing” as he does on the reggae-inflected “Less than Zero.” (A song about fascism in Britain.)

I’ve always loved (The Angels Wanna Wear My) Red Shoes.” Of it, EC said, “I wrote it in 10 minutes on a train out of Liverpool — the whole song in one gulp. … And then there was the whole comedic thing of getting it down. Nowadays you can demo things on your phone. I had to block it out in my mind. Then I had to get off the train, get to my mother’s house, grab an old guitar I had there and play the song until I imprinted it in my memory. I had no tape recorder. I had no way other than repetition to drill it into my head so I wouldn’t lose it.”

This song contains perhaps the greatest couplet in the history of music telling the whole story in exactly two lines:

This is, of course, the album that contained both “Alison” AND “Watching the Detectives.” The latter was a single in the UK but was added to the US album as the final track. A great, great, somewhat evil sound with, heavily percussive and nasty. “She looks so good that he gets down and begs.”

You think you’re alone until you realize you’re in it
Now fear is here to stay. Love is here for a visit
They call it instant justice when it’s past the legal limit
Someone’s scratching at the window. I wonder who is it?

A terrific album. Elvis would have more of them but never again would he sound so revenge-y, so guilty, so angry. Unfortunately, he’s gotten a bit twee in his later years, fancying himself a composer of oratorios, consorting with the likes of Burt Bacharach and string quartets. All well and good I suppose because an artist has gotta stretch. And it’s nice that he has a whole ‘I’m in love’ album about Diana Krall. But I’ll take the angry guy any day, thanks.

Here’s the rest of my list which I’ll visit periodically in future posts. In no particular order