My son – who was a baby when Kurt Cobain offed himself – grew to be a major league Nirvana fan. That fandom transferred over to the Foo Fighters. And so naturally he was heartbroken when drummer Taylor Hawkins died this year. The guy was such an enthusiastic out front person that even I knew who he was and I’m more a casual listener to the band.

When my son found out there were going to be two tribute concerts to Hawkins, one yesterday at Wembley, one next week in LA, he seriously considered going to either venue to see it live. It was right down to the wire with, apparently, some tickets opening up yesterday. But alas, he can now join the rest of us who have a long list of “Boy I wish I had gone to that show” regrets.

So he called me up and said, Hey, the Foos concert is going to be streaming on YouTube at 11:30 EDT Saturday, Sept. 3. If you’re not doing anything we’d like to watch it on something other than my laptop. Sure, sez I. We have a 4k TV in the basement which includes a “home theater” of a hastily installed Sony Soundbar and woofer.

Like I said, I’m not a big Foo fan but they do have a handful of songs I like so I figured, sure, what’s a couple hours? Well, to all our surprise, the show went on for six hours. (Wembley curfew is 10:30 London time). And what a show it was! I wandered in and out of the room on occasion but I caught most of it.

There were so many guests that they didn’t get to an actual Foo song for about 4 hours or so. To quote Consequence of Sound, “As Dave Grohl promised at the beginning of the show, it was “a gigantic fucking night for a gigantic fucking person.”

In fact, by the time the concert was all said and done, it spanned nearly six hours and featured a setlist of 50 songs.” (It turns out that a lot of people have “fucking’ as their middle name – Taylor Fucking Hawkins, Stewart Fucking Copeland, John Fucking Paul Jones, etc.)

It turns out the Foos (and Taylor) know EVERYBODY. At one point Grohl said that if they just invited all of Taylor’s musician friends that would be over 100. (Interestingly, he played for Alanis Morissette for several years but she didn’t appear. LA show?) Interestingly, Hawkin’s bass drum had a picture of Olivia Newton-John of whom he was apparently a big fan since he was a kid.

So I guess I’m sad for my son that he couldn’t go. But then again if he had I might never have streamed this show. And what a show it was! It was, by and large, a hard-rockin’ show that reaffirmed my faith in the power of rock and roll. It showed not only that it is NOT dead but also that the Foos have managed to be a bridge between classic rock (James Gang returns!) and current rock. Granted, the average age on that stage was probably 50+. But it sure didn’t sound like it

Just about every band was super tight and we found ourselves wondering how the hell they could all have rehearsed with each other. Best guesses are they got together in various ensembles a few days prior or that they all just learned their parts individually from the records. Either way, great stuff. Some highlights:

You can find other snippets up on YouTube but I couldn’t find the entire show. So if it’s up there, highly recommend you watch it. My son (and his girlfriend) pronounced it ‘sick’ and that is their highest possible praise.

I have no idea if they plan on live streaming the Foos’ next tribute but as to this one yesterday. 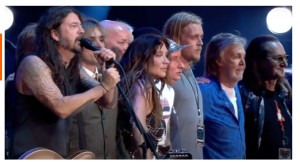